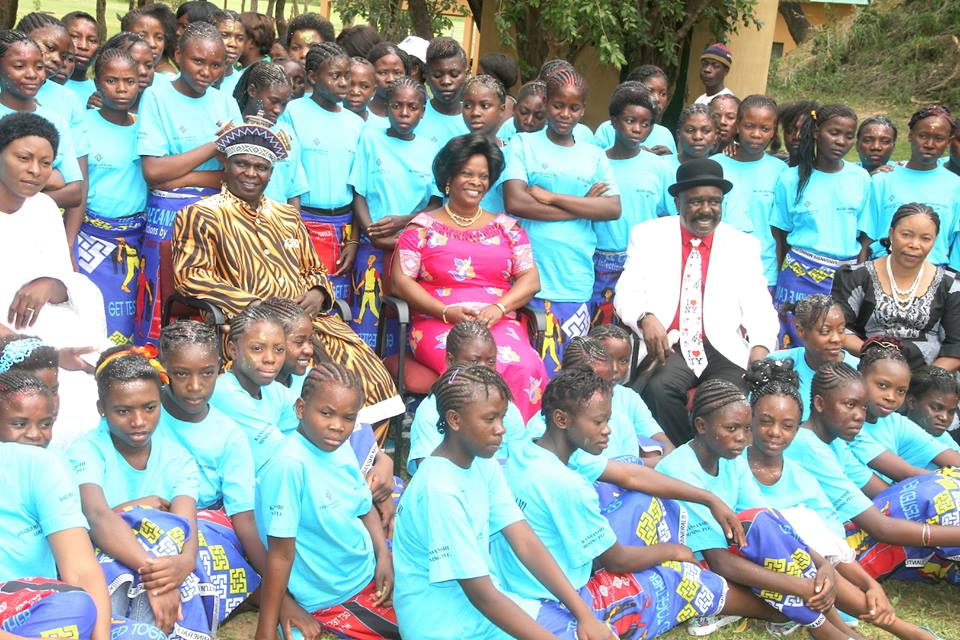 First Lady Esther Lungu with Chief Mumena, Chief Musele and the Girls after the closing ceremony of the First Quantum Minerals Girls Mentorship Camp at trident College in Solwezi on Monday, December 14, 2015. - Picture by THOMAS NSAMA.

BUTTYSON KANDIMBA, Solwezi
IN 2012 at the Rio+20 conference, the International Community decided to establish an agenda for sustainable development with 17 goals set which all the 195 countries of the World have committed to achieve.
The fifth goal on the agenda is to achieve gender equality and empower all women and girls.
However, government alone cannot afford to achieve this but it requires concerted efforts from key stakeholders across all sectors.
This is why First Quantum Minerals (FQM), the owners of Kansanshi Copper mine in Solwezi in 2013 started hosting girls mentorship camps to empower girls with knowledge that will help them propel towards high achievements in life.
The mentorship camps bring together girls aged between twelve and 18 from grades five to nine drawn from various Schools surrounding Kalumbila and Kansanshi mining operations.
The aim of the mentorship camps is to raise awareness on issues affecting the girl child that hinder them from achieving their desired goals such as child marriages, teenage pregnancies, poor social, cultural and health status and low literacy levels among others.
During the mentorship camps, entrepreneurship and business hands-on skills are imparted in the girls to help address the issues of poverty that is cited the number one cause of transactional sex, early pregnancies and child marriages.
The girls are also taught how to make fritters, door mats and tree planting nursery.
At the end of the mentorship camps, the girls are given a starter pack for fritter making business to support their living so that they could concentrate on their education.
The girls are also exposed to a career panel of successful women from rural and disadvantaged backgrounds to mentor them in health education, gender and skills as well as entrepreneurship skills.
Recently, 103 girls from 22 Schools in Musele and Kapijimpanga chiefdoms graduated at the 2015 FQM Girls mentorship camp at a colourful ceremony graced by First Lady Esther Lungu held at the Trident College in Solwezi.
Speaking at the event, FQM health co-ordinator Getrude Musunka said: â€œThe girls are mentored to become change agents within their schools and communities and we hope that this way, the girls can obtain their basic grocery needs and focus on education.â€
Mrs Musunka said the girlâ€™s mentorship programme is part of the broader girl empowerment programme that is being implemented using the school setting and includes sensitising the girls on sexual reproductive health and motivating them to focus on their education for sustainable development.
â€œThe programme also includes engagement with teachers, parents and the traditional leadership to ensure the ownership of the programme and support for the girl child both within the school and community setting,â€ she said.
She said FQM recognises that without deliberate efforts targeting the girl child, women and girls will not benefit from the many developmental programmes targeting primarily individuals from the immediate surrounding communities of Kalumbila and Kansanshi mines.
These include sponsorships of A level studies at Trident College, University sponsorships at the University of Zambia and South African Universities and skills trainings at Northern Technical College and Kwambula skills programme at Solwezi Trades Training Institute.
Mrs Musunka said FQM is committed to supporting activities that will have a positive impact on the social, health and economic status of the girls and women and the communities at large beyond the life of the mining company.
And First Lady Esther Lungu who graced the ceremony said the girls mentorship camp chimes precisely with Zambiaâ€™s aspiration to end all forms of discrimination against women and girls.
Mrs Lungu said she is happy that the camp has seen girls from all over North-Western Province empowered to identify their own self-image and thereby motivating them towards achieving the very best through training in survival skills, health education and promotion of formal education.
â€œWhen we support the growth and empowerment of women and girls, we raise the quality of life for everyone,â€ she said.
She said this is because when women are empowered, they fight for the children and they give voice to issues that are important to the collective future like education and health.
Mrs Lungu said women and girls must not see themselves as mothers and wives but must aspire to become doctors, accountants and business leaders that will help build a stronger, healthier and prosperous nation.
The First Lady said programmes such as the girlâ€™s mentorship camps being sponsored by FQM provide girls with viable alternatives to marriage and working towards more effective enforcement of existing laws that condemn child marriage is inevitable.
â€œTo First Quantum and Trident College, I offer my thanks because in this time of economic challenges, the commitment you have shown continues to impress all who see the work that you do,â€ she said.
Mrs Lungu said education and health are the two most important aspects of anyoneâ€™s early life if they are to live a decent life in future.
And North-Western Province Minister Dawson Kafwaya said most young girls in the province are faced with challenges of excelling in education because of vices such as teenage pregnancies and early marriages
Mr Kafwaya said it is sad to note that cases of early marriages and child pregnancies are on the upswing in the province.
Earlier, Chief Mumena of the Kaonde people of Solwezi said there is need to discard some cultural practices that hinder girls and women from progressing in life.
The traditional leader thanked First Lady Esther Lungu on her crusade to promote gender equality and women empowerment programmes.
In vote of thanks on behalf of the girls, Chipego Nambala, a grade eight pupil at Kapijimpanga Primary School said the camp has helped them to sharpen their vision for the future.
â€œIt has really made us smart, focused and uncompromising,â€ Nambala said amid cheers from the crowd.
She also commended the First Lady for leaving the comfort of State House to come and inspire the girls.