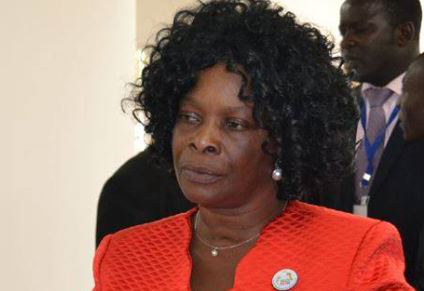 Mrs Lungu said China’s continued provision of quality higher education to Zambians is commendable and is attributed to the cordial relations the two sister countries, China and Zambia, enjoy.
She was speaking in Lusaka on Friday at a reception to mark the return and departure of Zambian students under the Chinese Government scholarship programme.
“As mother of the nation as well as education goodwill ambassador for the Forum for African Women Educationalists, I would like to thank you (the Chinese Government) most sincerely for the opportunity your country has continued to render in the areas of education,” Mrs Lungu said.
She thanked the Zambian Government for putting in place strategies and programmes that are empowering the youth not just in the short term but in the medium and long term as well. Mrs Lungu appealed to Zambian students who have been awarded the 2017 China scholarships to remain focused on their studies so that with the knowledge they will acquire, they can contribute to the country’s development agenda when they return.
“Always remember that your government, your parents and your sponsors have put in place a conducive environment not only for the betterment of your future but for the country at large. So desist from vices that will derail your focus on education. Always avoid negative peer pressure. That does not help you to become better persons,” she said.
Mrs Lungu said she was glad that the 26 students that were awarded music and dance scholarships by the Esther Lungu Foundation Trust in collaboration with the First Lady of China Peng Lyuang successfully completed their studies.
She announced that ten of the 26 students have been given the opportunity to further their studies in musicology at masters’ level.
Chinese Ambassador to Zambia Yang Youming said this year, the number of Zambian students accepted under various Chinese scholarship programmes is about 150, including 52 under the Chinese Government scholarship programme.
Mr Youming said six students have been accepted under Youth of Excellence Scheme of China (YES China) masters programme, nine under the Confucius Institute scholarship programme and 15 under several other scholarships provided by the Chinese Government.
“In addition, some 50 Zambian students studying in China have been awarded by their university scholarship to continue their studies,” he said.
And acting Minister of Higher Education Sylvia Chalikosa reminded the students that they are not going to China as tourists but as students, hence the expectation on them to work hard to ensure they excel in their studies.
“Please, ensure that you observe the channels of communication, that is through the Zambian embassy in Beijing. Avoid at all costs and times communication with third parties before informing the embassy. This will in turn ensure a good and conducive stay for you whilst in China,” she said.
And Minister of Labour and Social Security Joyce Nonde Simukoko says education is the greatest equalizer that puts men and women on the same level playing field, reports DOREEN NAWA in Lusaka.
Speaking to current and former Roma Girls Secondary School pupils at Silver Jubilee celebrations of Ex-Roma Girls Association (EROGAN) yesterday, Mrs Simukoko said education cannot be taken away from anyone.
Mrs Simukoko told the gathering to concentrate on books adding that competition is stiff in the world of employment.
She said education is no longer just a pathway to opportunity and success, it is a prerequisite for success.
EROGAN chairperson Mwangala Muyoyeta said the association has embarked on a fundraising project to construct the school’s registry block and K85,000 has so far been raised.