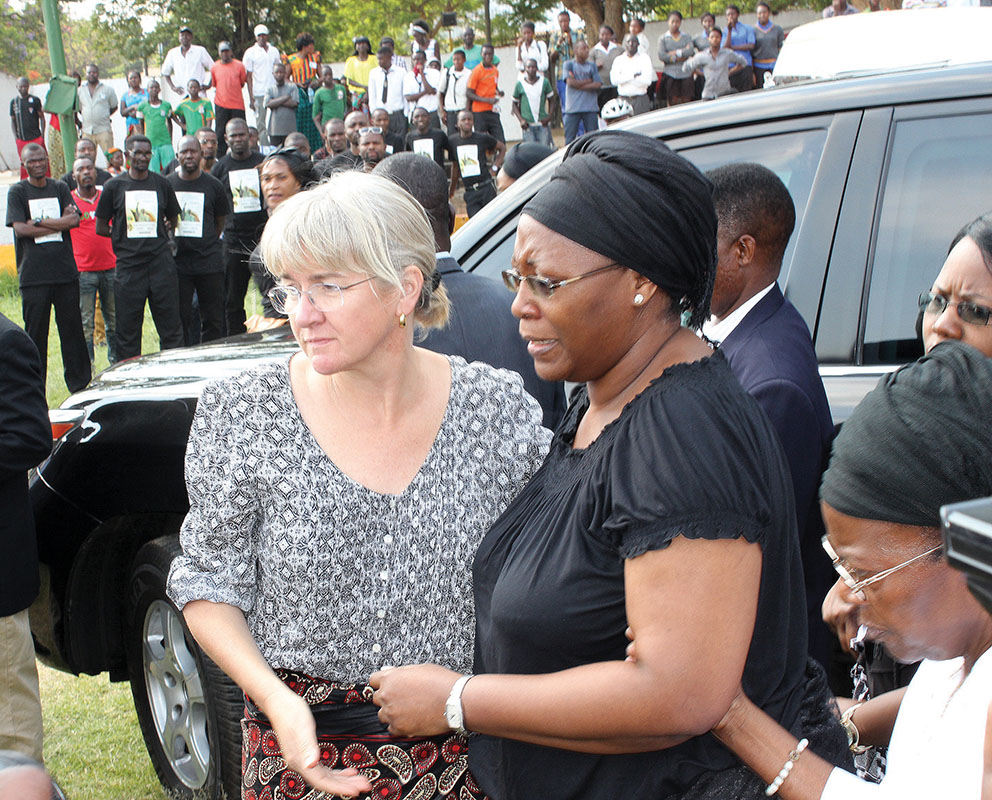 NANCY SIAME, Lusaka
FIRST Lady Christine Kaseba for the second time on Thursday joined mourners at the Lusaka Showgrounds, the designated venue for President Sataâ€™s mourning.
And Council of Churches in Zambia (CCZ) general secretary Suzanne Matale says President Sata had the right vision to develop Zambia and has urged the next leader to continue on the path of development.
Dr Kaseba, who was accompanied by acting President Guy Scottâ€™s wife, Charlotte, members of the first family and senior Government officials, arrived at Lusaka show grounds around 15:40 hours and mourned with ordinary citizens up to 17:20 hours.
The solemn occasion was characterised by performances by musicians from both within Lusaka and outside.
Rev Matale said that Mr Sata was determined to develop Zambia and would have done a lot more for the country.
â€œHe is no more but his vision must live on and as a church we want serious leadership from those that have remained in the Patriotic Front,â€ Rev Matale said.
She urged the PF to keep the nation united in honour of Mr Sata.
Rev Matale said the country needs leaders that will give it a fresh perspective of leadership.
â€œWe look forward to prosperity as a country so that the fallen heroes can be honoured,â€ Rev Matale said.
She said with good leadership, nothing is impossible and leaders must always learn to live by their words
And MAPALO LUPUPA reports that Transparency International Zambia (TIZ) executive director Goodwell Lungu said President Sata exhibited self-determination in stamping out corruption.
â€œWhat we would like to indicate is that the person who is going to take over as President should continue with the fight against corruption, which Mr Sata pursued,â€ Mr Lungu said.
LINDA NYONDO reports that the Road Traffic and Safety Agency (RTSA) has described President Sata as a leader of immense passion who helped to reduce road traffic accidents.
RTSA chief executive Zindaba Soko said the late President was determined to reduce road traffic accidents.
According to statistics, Zambia recorded a decline in road accidents in 2013.
In 2012, there were 2,360 road traffic accidents recorded while in 2013, there were 1,851 accidents.
This represents a decline of 21.5 percent.