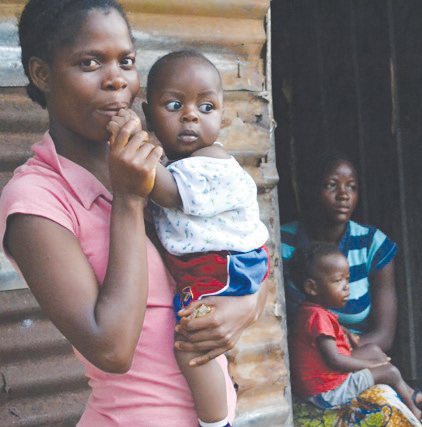 KAPALA CHISUNKA, Lusaka
SHE was only 17 years, and doing Grade 11. Like most people her age who tend to experiment, she thought the occasion would be memorable.
Yes, it turned out to be memorable, but for the wrong reasons.
It was New Year’s eve when Lisa Passmore and her friends decided to celebrate at a night club.
As you would expect, she ended up drunk and in the process befriended a boy in the club. The results of that encounter revealed themselves a few months later.
“When I met the guy, I was already drunk. We went home together and I did not realise we had unprotected intercourse,” Lisa says. “Three months later, I started getting sick in the mornings not knowing that I had conceived until my grandmother told me.”
Her grandparents, who were her guardians, did not appreciate the idea of her being pregnant.
They sent her away from their home. There was something else, the man denied responsibility. So, she opted to relocate to Kasama.
“[But] Before I left, I went to the University Teaching Hospital (UTH) where they confirmed the pregnancy. I told the nurse that I was not financially able to take care of a baby,” Lisa says. “She counselled me and encouraged me to keep the baby.”
However, Kasama proved to be another challenge. So, she decided to return to Lusaka after four months with one thing on her mind – abortion.
But she thought through again and decided to heed the nurses of keeping the baby.
While waiting to deliver, Lisa moved in with her aunt in Lusaka.
“I had a baby boy. And after three months, I left my baby in the custody of my sister at my mother’s home,” she says. “I then moved in with my friends and started a life of sleeping with men in exchange for money.”
Just call it prostitution.
Lisa was able to make some money which she would send for the upkeep of her son and the rest would be used on her personal needs.
Unfortunately, things got worse. Three men raped her on her way from a night club.
“That incident made me question the path I had chosen for myself,” she says. “So, I decided to go back to my parents and begged for forgiveness. But they were not sympathetic and didn’t care because of the life I was living.”
Still unsure about her life path, Lisa met another man who offered her shelter and the two moved in together. In the second month of staying together, she fell pregnant for the second time but the man refused because “he said he met me with one of the friends and was not sure if the pregnancy was his.”
Though he did not chase her from his home, the pregnancy changed the relationship so much that she was left with no option but to go back and beg her parents yet again for a place to stay.
“They allowed me back. I fell very sick and at seven months, I went into labour and delivered a premature baby boy,” she said. “We stayed at UTH until he died at three months. After three months, I came back to UTH and met someone at SPEED [Social Peer-to-peer Education Elevation for Dedication based at UTH] adolescent club who counselled and encouraged me to change my ways.”
SPEED is a an HIV activists group of adolescent volunteers most of whom are living positively and have found a safe space in the adolescent corner sharing their experiences, engaging in activism work around sexual reproductive health and gender-based violence.
And that was how Lisa begun to transform her life.
First, she joined her grandmother by helping her sell scones as a hawker in town until she raised enough money to sponsor herself for a course in pyschosocial counselling course at UTH.
UTH later picked and trained her as a peer educator as well as a master key mentor.
Lisa, now aged 26, is one of the trainers at UTH centre of excellence. She is a trained peer educator, peer mentor, and psychosocial counsellor.
She is working with SPEED Diamonds; an adolescents club for young women to help and empower them to rediscover themselves and develop abilities.
They are also taught about family planning and reproductive health.
But Lisa is not the only success story at the UTH centre of excellence. She is one of the 1, 000 adolescents that have been trained at the centre over the past 10 years.
However, SPEED, whose executive director is Muzimbi Simwinga and country director Taonga Tembo Kennedy, was formed in 2015. It is based at UTH Centre for Infectious Disease Research in Zambia (CIDRZ) adult centre of excellence and they spearhead peer education programmes.
SPEED interim public relations manager Shambala Maria Diangamo says the organisation offers psychosocial support and sexual reproductive health education to adolescents.
“We are biased towards HIV positive adolescents because they face more challenges than the regular young person,” Ms Diangamo says. “We believe sexual reproductive health education can impact all younger women and young people. But we educate all younger women regardless of their HIV status.”
Working in conjunction with an organisation called Changing Lives for Adolescents and Children (CLAC), SPEED has also extended sexual reproductive health education to Mazabuka, where it has trained peer educators who have also become master trainers under the Ministry of health manual and Theatre for Development.
SPEED diamonds also participate in running of the adolescent Anti-Retroviral Therapy (ART) clinic activities in UTH through peer education programmes and patient adherence follow-ups.
Adult Centre of Excellence clinical officer Esnart Nyambe says the adolescents are under UTH management care.
Ms Nyambe says the adolescents have been trained as peer educators in order to help them remain focused as well as retain them in care.
“This is a clinic. Some of these adolescents have been with us for as long as 10 years. We encourage them to stand up for themselves, avoid early pregnancies and utilise services available for them,” she says.