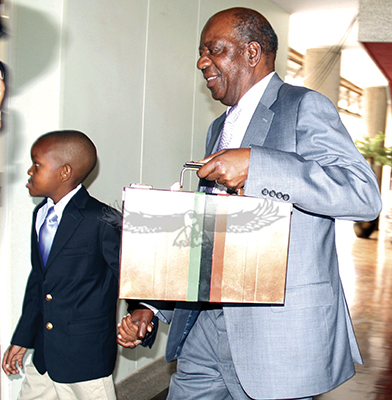 NANCY SIAME, Lusaka
THE Ministry of Finance (MoF) has started preparations for the 2016 national budget and the 2016-2018 Medium Term Expenditure Framework (MTEF).
MoF spokesperson Chileshe Kandeta said in a statement issued in Lusaka yesterday that the ministry has made steady progress towards the preparations.
â€œTo facilitate broader consultations, members of the public are invited to submit proposals for tax and non-tax revenue policy for the 2016 budget,â€ he said.
Mr Kandeta said the consultation period, which will end on July 31 this year, has been set to ensure that all citizens, including the youth, women groups, the private sector, and other interest groups participate in the formulation of the 2016 budget and the 2016 to 2018 MTEF.
He said the ministry is steadfast in its resolve to ensure citizen ownership of the 2016 national budget.
â€œIn this regard, all interested parties, especially those representing interest groups, are encouraged to ensure that internal peer consultations are conducted,â€ Mr Kandeta said.
Mr Kandeta said the treasuryâ€™s view is that peer-level, internal and open consultations among stakeholders should be held as they are an important ingredient of institutional and corporate governance.
He said this is important because submissions which will finally be received by the MoF should pass the internal litmus test, and have the support of the members of the respective stakeholder organisations or interest groups.
And commenting on the initiative, Secretary to the Treasury Fredson Yamba said the process is not a partisan mission, but a pragmatic search for tax and non-tax policy consolidation, widespread employment creation, promotion of the greater well-being of the people of Zambia, and reinforcement of Zambiaâ€™s attractiveness as a preferred destination for long-term investment.
Mr Yamba also emphasised that the proposals submitted to the ministry must clearly outline proposed measures with justification and expected outcomes.
â€œOutline anomalies and challenges in current statutes which are proposed to be corrected and justify expected improved outcomes, especially in revenue collection,â€ he said.