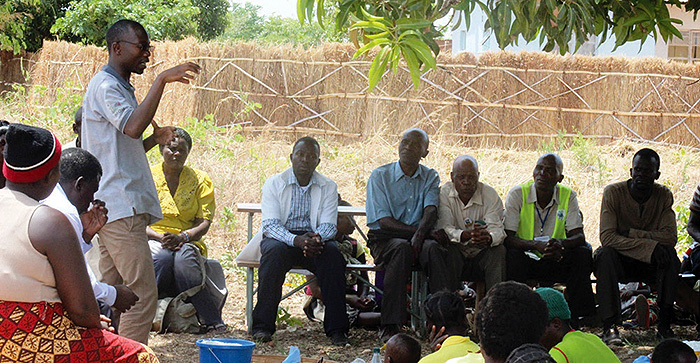 DARLINGTON MWENDABAI, Chipata
AVAIDA Sakala, 54, a Petauke mother of seven, is thankful that her daughter has an opportunity to deliver safely as she waits at Petauke District Hospital.

Having delivered six of her seven children at home with the assistance of traditional birth attendants, Ms Sakala knows all too well the risks that women who have no access to qualified medical personnel face.
“I could have died in labour and so I thank God I’m alive today,” she says.
Speaking in an interview outside the maternal ward, Ms Sakala says she does not wish for any woman to die in labour and appreciates the benefits of delivering in health facilities instead of homes.
“Hospitals have skilled manpower to handle maternity cases as opposed to traditional birth attendants,” Ms Sakala says.
Ms Sakala urged every pregnant woman to visit health facilities for antenatal and post-natal services especially that they are now available even in rural areas.
“During our days, there were few health facilities accessible to rural women hence many resorted to giving birth at home under unskilled hands of traditional birth attendants,” she says.
She urged women to take advantage of the increase in health facilities such as health posts, clinics and hospitals.
The same sentiments were echoed by a 39-year-old mother of six, Jennifer Zulu, who urged women to embrace the call by Government to give birth at health facilities.
“Some women lose a lot of blood during labour, so it is better when one is at a health institution where blood transfusion facilities are available,” she says.
These women are in a district that lies about 420 kilometres east of Zambia‘s capital city, Lusaka and 180km west of Chipata City. The district borders Nyimba in the west, Sinda to the east, Serenje in the north, Mambwe in the North-east and the neighbouring country of Mozambique in the South.
The two Petauke women can consider themselves lucky. According to a World Health Organisation (WHO) 2014 report titled, ‘Trends in Maternal Mortality:1990 to 2013,’ estimated life time risk of maternal deaths in Zambia stands at 1 in 59.
“It should be noted that each year, more than 208 million pregnancies occur globally; 185 million occur in the developing world alone. More than 500,000 women die annually due to pregnancy-related complications,” the report reads.
The report further observes that in many low-income countries, the maternal mortality ratios are 100-fold greater than in high-income countries. For instance, the adult lifetime risk of death due to pregnancy was 1:39 in Sub-Saharan Africa against 1: 3800 for developed countries.
According to a United Nations Development Programme 2013 report, Zambia continues to face high levels of maternal mortality with an average of 38 women dying every month due to pregnancy and childbirth. The central statistical office (CSO) 2012 figures indicate that close to 500 women out of every 100,000 die in the process of giving birth. The report also indicates that Zambia has sought to reduce maternal mortality by ensuring universal access to family planning, skilled attendance at birth, and basic and comprehensive emergency obstetric care.
Petauke health district director Charles Fanaka said one of the measures include engaging traditional birth attendants in community awareness programmes on reproductive health and importance of delivering in health institutions.
“Sadly, eight maternal deaths have since been recorded in the district compared to six last year,” Dr Fanaka said in an interview.
Dr Fanaka says partners such as Churches Health Association of Zambia are supporting the district through the SM360+ project in reproductive maternal new-born adolescent and child health (RMNACH) activities as a measure to reduce maternal deaths.
He said the Swedish International Development Agency (SIDA) is also supporting RMNACH while Centre for Infectious Disease Research in Zambia is supporting HIV/AIDS activities.
He says other measures taken include training staff in emergency obstetric and neonatal care (EmONC) to manage complicated maternal cases.
“So far, 140 community- based volunteers have been trained through the safe motherhood action groups in Refuge, Mankhungwe, Mwanika, Merwe, Chikuse, Satellite 30 and Satellite 18 Rural Health Centres. He says the health facilities will be supplementing the existing two first level hospitals: Petauke district Hospital and Minga Hospital,” he said.
Dr Fanaka says the rehabilitation and extension of health facilities as well as construction of a mothers’ shelter and maternity annexes have been undertaken since 2015, resulting in an increase in institutional deliveries in the province.
Provincial medical director, Abel Kabalo said the province also recorded a reduction in child mortality from 32.3 per 1,000 births in 2013 to 31.4 per 1,000 births in 2014. He also said maternal deaths dropped from 81 in 2013 to 71 in 2014.
Speaking in an interview in Chipata, Dr Kabalo said in 2014 Government procured ambulances and motorbikes in line with the 2010 campaign on accelerated reduction of maternal death with one objective captured in the phrase – No woman should die while giving life.
He said as at December 31, 2016, the province had recorded 92 maternal deaths while 47 had been recorded from January to July 2017. In terms of districts, Dr Kabalo said Chipata recorded 15 cases, Katete 8, while Petauke recorded 6.
And provincial permanent secretary Chanda Kasolo said health facilities will continue to be constructed and fitted with medical equipment to ensure women have access to needed services. He said so far 20 ambulances and 105 motorbikes have been procured with support from SIDA to promote maternal health.