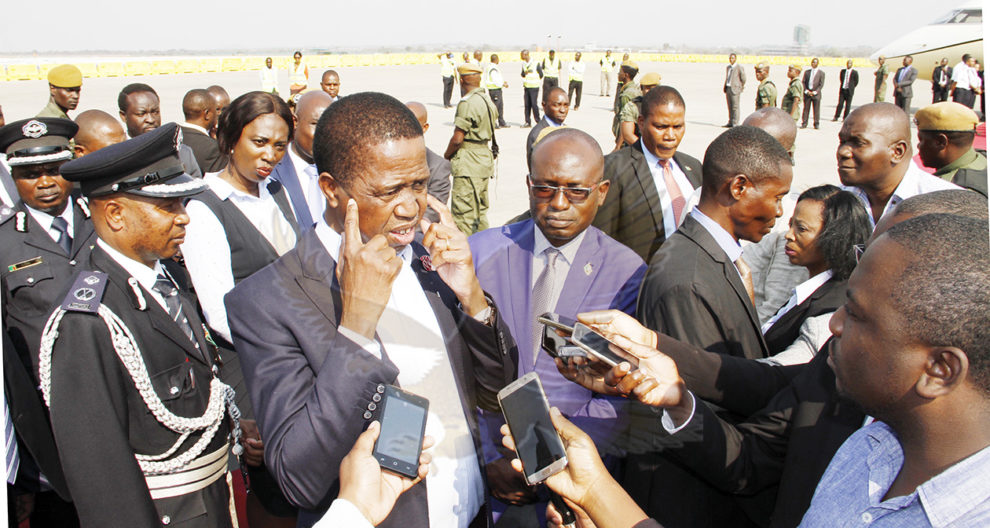 STEVEN MVULA and MWAPE MWENYA, Lusaka
ZAMBIANS must not fear the newly proclaimed mandatory HIV/ AIDS testing because results, whether positive or negative, will remain confidential between them and their

medical practitioners, President Lungu has said.
And the Ministry of Health has said there is no justification or human right in killing yourself by not knowing your HIV status and neither is it a human right to infect others.
President Lungu says he is surprised that some people have misconstrued the mandatory HIV/AIDS testing policy meant to protect ordinary people as something that will make results public.
“People should not be scared to test because they will live longer if they know their HIV status. I wish to clarify that Government declared to the public that we will be examining you whether you want it or not and we will counsel you and tell you that you are HIV-positive and treat you. And that will remain between you and your medical practitioner,” President Lungu said.
He was addressing journalists yesterday at Kenneth Kaunda International Airport shortly before he left for Rwanda to attend today’s inauguration of Paul Kagame, as re-elected President.
President Lungu said he decided to personally comment on the matter because he is getting the impression that when one is found HIV-positive, then those results will be made public.
“Confidentiality remains part of the ethics of the medical practitioners. When we speak to you, we speak in clear and calculated language. We will check for HIV/AIDS, we will counsel you whether you are positive or negative. If you are positive we will treat you if you warrant treatment. That is what I said,” President Lungu said.
He challenged those wishing to take legal action over the matter to do so.
“Some people are saying ‘we will go to court’. Go to court if you want. But me as President, it is my responsibility to ensure Zambians live long, healthy, quality lives. But others are saying it is their constitutional right to privacy. Even in Cabinet they respect the issue of privacy,” President Lungu said.
He said as medical practitioners are taking vital statistics from patients, HIV/AIDS tests will also be undertaken.
The President said Zambians should learn to listen and talk less.
“You are saying ‘Lungu is a dictator’ because he wants to help you by knowing your HIV status so that if your viral load is already beyond, then you are put on medication. Your family needs you, Zambia needs you, if some people do not care about you,” President Lungu said.
He was seen off by Vice-President Inonge Wina, Patriotic Front secretary general Davies Mwila and some ministers.
Meanwhile, Minister of Health Chitalu Chilufya says 81 percent of deaths at the University Teaching Hospital are HIV-related, and one million Zambians have died from HIV and AIDS since 1988.
Dr Chilufya said 1.2 million Zambians are HIV positive and less than 85 percent are on anti-retroviral treatment.
He said the American Government, through the President’s Emergency Plan for AIDS Relief (PEPFAR), has approved US$401 million for HIV treatment in Zambia.
He said that the Global Fund has also given Zambia US$270 million HIV treatment.
Dr Chilufya warned that Government will deregister health personnel who disclose confidential information about the status of individuals without their consent.
He said the decision should not be misinterpreted as an infringement of human rights as it is aimed at protecting people’s lives.
“Who tells you it’s your human right to kill yourself by not testing? Is it also a human right to infect a young girl? We will not continue doing things the same and expect positive results,” he said.
The minister said this yesterday at the Patriotic Front (PF) media interactive forum.
He said HIV mandatory testing is aimed at saving people’s lives and it should not in any way be politicised.