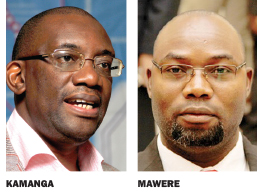 ROBINSON KUNDA, Lusaka
THE much-anticipated Football Association of Zambia (FAZ) emergency council meeting is on today at Government Complex in Lusaka where councillors will tackle the constitution amendment.
And Minister of Youth, Sport and Child Development Moses Mawere has advised councillors not to spend time discussing the suspensions of FAZ vice-president Richard Kazala and executive committee member Blackwell Siwale.
The National Sports Council of Zambia (NSCZ) directed FAZ to remove the item from the agenda because it is carrying out investigations into the matter.
Some clubs and councillors are of the view that the case should be discussed while others are against.
The duo is accused of failing to account for K150,000 from ticket sales for the 2018 Russia World Cup qualifier between Zambia and Nigeria last year.
FAZ deputy general secretary Lombe Mbalashi said in Lusaka yesterday the meeting will start at 09:00 hours and appealed to councillors to observe time.
Mbalashi maintained that the Kazala and Siwale case would not be discussed.
The hot issue under the constitution amendment is the reduction of the Electoral College from the current 350 to just 80 in line with the FIFA directive.
Councillors have received this proposal with mixed feelings, especially those from lower division clubs, who feel they will be detached from main-stream football once they are excluded from attending FAZ annual general meetings.
FAZ president Andrew Kamanga said teams that will no longer be part of the Electoral College will still choose people to represent them.
Another item that will divide councillors is the proposed formation of the nation-wide Division One.
Currently, Division One is zoned into four regions with the winners earning promotion to the Super Division but the proposal to form a nation-wide league entails that this arrangement will be abolished and all teams will compete against each other for promotion.
Councillors will also vote whether to increase the number of teams in the Super Division from 18 to 20.
This is a motion that is likely to go through without much debate going by the response that has come from clubs.
And Mawere said the meeting is an opportunity for councillors to shape the future of Zambian football.
He said councillors should not dwell on discussing Kazala and Siwale but should mould ideas that will take football forward.
â€œAs far as I am concerned, there are no wrangles in FAZ. Councillors should discuss important issues,â€ Mawere said.