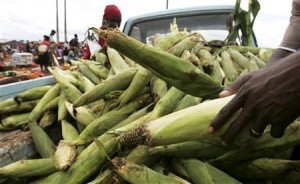 ESTHER MSETEKA, Lusaka
THE United States Agency for International Development (USAID) says Zambian maize farmers are expected to double their use of fertiliser and significantly plant high-yielding hybrid seed in the 2014/15 farming season.
Feed the Future under the auspices of USAID promotes local government policies that encourage private-sector competition to buy smallholdersâ€™ maize.
USAID administrator and coordinator for the whole-of-government initiative Rajiv Shah said in a statement posted on the organisationâ€™s website that local farmersâ€™ access to inputs improved with private-sector suppliersâ€™ involvement.
Dr Shah said Zambiaâ€™s good agricultural policies helped the country achieve its largest-ever maize harvest in the 2013/14 farming season.
â€œThrough Feed the Future, we are harnessing the power of science, technology and innovation to unlock opportunity for the worldâ€™s most vulnerable people.
â€œBy creating and scaling cutting-edge solutions to our most pressing agricultural challenges, we can help the worldâ€™s most vulnerable people move from dependence to self-sufficiency and out of the tragic cycle of extreme poverty,â€ he said.
Dr Shah said the initiative contributed to a 32 percent rise in maize production in the last farming season.
Feed the Future draws on the skills, expertise and resources of 10 other United States government agencies in a coordinated approach to reduce global hunger, poverty and undernutrition.
The primary objectives of the initiative are to improve food security by increasing productivity and incomes as well as reducing undernutrition in 19 priority countries.
Feed the Future reflects a new model for development that leverages partnerships with a wide range of stakeholders, including leadership from countries themselves.
The programme focuses on improving the lives of smallholder farmers, especially women.
In 2013, Feed the Future helped nearly seven million farmers and food producers to use new technologies and management practices such as high-yielding seed varieties on about 9.9 million acres of land.