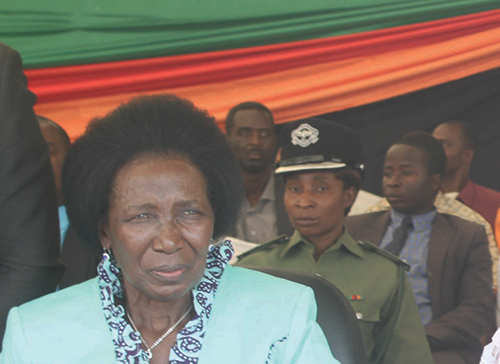 SYLVESTER CHISHIMBA, Lusaka
GOVERNMENT says it has effectively intensified the development of small holder irrigation schemes in all parts of the country.
Speaking as guest of honour at a farmersâ€™ and hoteliersâ€™ gala night to mark Zambiaâ€™s 51st independence anniversary celebration held at Mika Convention Centre in Lusaka on Friday, Vice-President Inonge Wina said the country has a lot of water resources, which could be used for irrigation in order to increase agricultural production among small-scale farmers throughout the year.
â€œTo further support all year agricultural production, Government has embarked on a programme to make fertiliser and other inputs available all year round. Farming and crop production must not be a seasonal undertaking when we are endowed with abundant water and other resources to produce all year round,â€ she said.
Mrs Wina said in a speech read for her by Minister of Agriculture Given Lubinda that the capital injection by Government to resuscitate fertiliser production at Nitrogen Chemicals of Zambia to meet demand.
â€œGovernment is committed to diversifying agricultural production. As such, we are now promoting a variety of food crops such as rice, cassava, sorghum, groundnuts and millet apart from maize. Cash crops like cotton are also being revitalised with the aim to have abundant crops grown in large quantities to meet out national requirements for food and industry. We also want to enhance value addition to boost earnings on the local and international markets,â€ she said.
Mrs Wina said the livestock sub-sector is equally receiving necessary attention as Government works towards reducing the prevalence of livestock diseases among small-scale farmers.
â€œGovernment is intensifying vaccination campaign against various livestock diseases while the creation of disease-free zones is underway to promote livestock production,â€ she said.
Mrs Wina commended the farmers and hoteliers for their hard work and positive contribution to fostering the prosperity of Zambia.
And earlier Zambia National Farmersâ€™ Union president Evelyn Nguleka said her organisation is in the process of constructing agricultural service centres country-wide with help from the European Union to respond to the different commodity marketing challenges that farmers currently face.