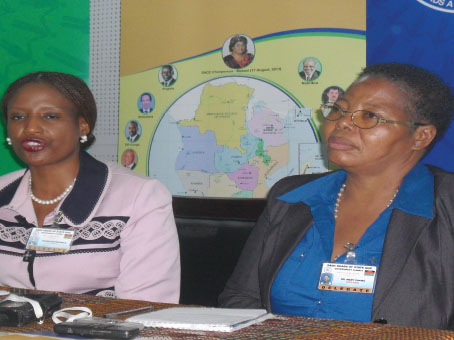 By Emelda Mwitwa
JUST how more robust and innovative can measures to prevent and deal with gender-based violence (GBV) be?
Apparently, every day, there is the unfortunate news of either a child being sexually molested, a woman being battered by her spouse or even a husband strangled.
Last week, a man was murdered by his wife who hit him with a stone on the nose after the couple picked a quarrel.
Sharon Mwenya, 20, of Kitwe is currently in police custody for the suspected murder of Isaac Makamu, 31. And just last month, a woman was arrested for stabbing her husbandâ€™s private part.
Cases of GBV are way too many and I think after a successful campaign of persuading victims to come out in the open, we also need to aim for prevention.
Women are also getting caught up on the wrong side of the law, and honestly there is nothing like sugar-coating murder with the self-defence story.
It seems we are slowly degenerating into a society that believes in violence as a means of solving problems.
For your information, our region is said to have high incidences of GBV against women and girls. According to Magdeline Mathiba-Madibela who heads the gender unit at the SADC Secretariat, these forms of violence include domestic violence, sexual violence, armed conflict, incest and child molestation, among others.
These, she said are closely interlinked to poverty, HIV and AIDS and climate change.
In other words, victims of poverty and other social hitches which weaken peopleâ€™s defence mechanism are more likely to suffer domestic violence.
According to Ms Madibela, GBV continues to be fuelled by root causes such as gender inequality, patriarchal tendencies, negative cultural and traditional norms.
For instance, the domineering role of men in every social dimension of human interaction makes women subservient to their male counterparts even in a negative fashion.
One typical example is the â€œphysical chastisementâ€ of oneâ€™s spouse which is seen as a normal way of instilling discipline.
I am sure some of you are aware of perceptions held strongly in our communities that if a husband does not beat his wife, then he doesnâ€™t love her.
Others believe that a man who canâ€™t exert â€œauthorityâ€ by beating his wife is under petti-coat government.
Apparently this is what pushes men and sometimes women, into laying hands on their spouses, and as a result, causing maim and death.
These are some of the negative cultural beliefs and practices which we need to discard to stop GBV.
The biggest challenge before us today is to change mind-sets. We can have perpetrators of violence named and shamed, or thrown in jail – for as long as we donâ€™t change mind-sets, the battle is far from being won.
Absorption of oneâ€™s culture takes quite long, therefore getting rid of negative traditional norms and beliefs will require collaborative and sustained efforts.
According to information that was released at the just-ended ordinary summit of the SADC heads of state and government, member states have made notable achievements in legislating and developing policies for combatting GBV.
Fourteen countries, Zambia inclusive, have put in place specific legislation on domestic violence, while12 member states have legislated against sexual offences.
According to Ms Madibela, despite the progress made by member states in implementing various programmes and projects to deal with the scourge, much remains to be done to establish a fully integrated approach to provide for comprehensive prevention of violence, support and services to GBV survivors.
She said we need to intensify and strengthen efforts in the prevention of GBV at household, and community levels especially domestic violence which remains paramount.
In other words, although we have put in places good laws and policies to fight GBV, it is not helping much.
Good laws alone are not enough â€“ we need good systems and strategies for fighting sexual violence, domestic violence and child abuse among others.
Having a good law which you cannot ably implement is as good as not having one. It seems, this is one of the reasons why GBV continues to rank high in SADC despite member states having good laws to counter the scourge.
In Zambia, for instance, we have the Anti-GBV Act, which guarantees a holistic approach to dealing with matters of domestic and sexual violence, but perhaps the challenge is on implementation.
The Act does not only warrant the successful prosecution of culprits, but also provides for the protection of victims during trial.
Under the Act, victims of GBV are entitled to temporal shelters and also vocational training and empowerment so that they donâ€™t revert to abusive relationships.
Perpetrators of violence also stand to benefit from rehabilitation programmes. For example, according to the Act, the court can refer both the offender and the complainant for counselling, in a case where the latter opts for an out-of-court settlement.
And where necessary, the offender may be referred for psychiatric help.
And this to me is the best way of dealing with the problem of GBV whereby you incorporate both men and women into programmes and activities aimed at ridding our communities of violence.
The counselling part of offenders as provided for in the Anti-GBV Act is what creates a wholesome approach to this campaign. Any gender awareness-raising activity that targets either women or men only is likely to fail.
In other words, telling battered women to report abusive husbands to police is not enough, if we donâ€™t tell the men to love and respect their wives.
From what I see, we have made commendable efforts in sensitising victims of abuse to come out of their cocoons.
Evidently, we have seen more people reporting cases of domestic violence and child defilement.
What we need to do now is to get to prevention zone. Simply put, we need to get to a place where it doesnâ€™t happen anymore â€“ no spouse battering, no killing of intimate partners, no more defilement of children and no more humiliating and dehumanising traditional practices.
eshonga@daily-mail.co.zm/emeldashonga@yahoo.com. Phone 0211- 227793/221364.