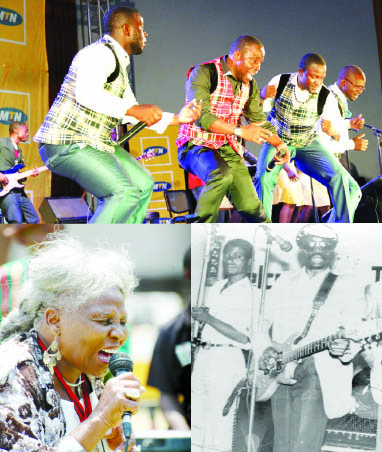 The story of Zamrock starts on the Copperbelt, with the exploitation of copper.
KELVIN KACHINGWEÂ  – Lusaka
WHAT is Zambian music? It is a question that even Zambian musicians themselves will fail to categorically answer. Perhaps the closest they will come to answer that question is by saying Zambian music is that which is sang by Zambian musicians.
Indeed, the Zambian music scene has changed its complexions over the years. You just have to look at the names.
Alick Nkhata, The Big Gold Six, Yandikani Lungu, Dorothy Masuka, Kenneth Kaunda, Mpundu Mutale, Mosi-o-Tunya, The Witch, Keith Mlevu, Ackim Simukonda, Emmanuel Mulemena, PK Chishala, Lazarous Tembo, Anna Mwale, Amayenge, Smokey Hangaala and Luanshya Express Band.
Or, if you want, you can go to what Leonard Koloko calls the era of imitators.
More will follow on Mr Koloko.
In the era of imitators, you will find names like Paper Lace, the Crusaders, Crystal Blu and Trades Flute.
But who can ever forget the Zamrock era! Perhaps, not even those that never lived in its time. Only recently, there was an international re-release of its classics.
The story of Zamrock starts on the Copperbelt, with the exploitation of copper there.
The Guardian newspaper of the United Kingdom got it right in an article last year following the re-release of Zamrock classics.
Under colonialism, Zambiaâ€™s various chiefdoms and tribes merged into one centrally ruled polity. Political, economic and social change rocked the country. Mass migration into the mining towns meant that musicians had an exposure to different musical styles.
Traditional instruments â€“ from drums (such as the high-pitched â€˜talkingâ€™ Vimbuza), to stringed instruments (like the babatone) to the kalimba (hand piano) â€“ joined with instruments such as the accordion and guitar, which were brought to the country by the British ruling class.
But at the time Western rock, psychedelic music and Congolese rhumba were popular, Zambia gained its independence. Following that was the creation of the Zambia Broadcasting Services (ZBS).
Then President Kenneth Kaunda, a musician himself, in a watershed speech, decreed that majority of music on national radio should be Zambian. The idea was perhaps to create a uniquely Zambian musical presence.
But the result was somewhat different.
It was a case of the west meets southern Africa or Zambia for that matter.
Just call it Zamrock.
Like The Guardian reported, Zamrock is somewhat a musical style that came to embody the economic despair of the time as Zambia was flung into a recession and social tensions.
There is evidence to that as demonstrated by some songs of that era.
There is â€œWorking on the Wrong Thingâ€ by Rikki Illilonga and the Mosi-o-Tunya which talks about a migrant worker being far away from home and Iâ€™Ve Been Losing by Chrissy Tembo and the Ngozi Family which talks about everyday injustices.
But they also captured the wider politics on the African continent.
And to that effect, you find songs like the Peace by Black Power.
Anyhow, the best known Zamrock bands are perhaps Mosi-o-Tunya and Witch, which stands for We Intend to Cause Havoc. That is, however, not to take anything away from the likes ofÂ  Akwila Simpasa, Dr Footswitch, Black foot, the Five Revolutions, the Five Balls, Jeff Mulenga, The Machine Gunners, The Sentries, The Living Dead, Madzi-a-Moyo and Chrissy Zebby Tembo among others.
But it has not always been about Zamrock.
How about Kalindula?
It is there that you find names like Spokes Chola, Philipo Chimbini, Labani Kalunga, Brian Chilala, Mashabe Band, Julizya Band, Glorious Band, Kalambo Hit Parade, Mutende Cultural Ensemble, Eagles Band and indeed the Amayenge. In fact, the Amayenge deserve a separate and independent write-up.
And of course you cannot write the story of Zambian music without reggae. Otherwise, you will be saying the likes of Maoma, Wapolina Mkandawire, Maiko Zulu, Burning Youth, Bantu Roots, Rodwell Chilambwe, Chileshe Nshumfwa, Jo Angels, Matthew Tembo, Jah Luther, Ras Mute, Davies and the Wings, Crucial Lions, Wailing Roots and Chris Aka among others are irrelevant.
But when you look at the above names, it may seem like women have been absent from the music scene. Yet, you have the likes of Violet Kafula, Marsha Moyo, Sista D, Maureen Lilanda, Lily T, Yvonne Mwale, Alice Chuma, Linda Ngozi, Jane Osbourne, Joyce Nyirongo, the Mwale Sisters, Angela Nyirenda, Alice Chali, Lindiwe, Shatel, Loveness Kumwenda, Amba 04, Cecilia Mwape, Ginnie Hidie, Kay Figo, Judy Yo and Tasila Mwale among others.
Still, the history of Zambian music cannot be complete without the mention of rhumba.
Mr Koloko writes that if there is a genre that has come to be generally accepted as the official African music across the globe, it has to be rhumba music. He chronicles some of the Zambian rhumba musicians to be the likes of Francis Mutwale, Peter Tsosi Juma, Benson Simbeye, the Great Fire Family, Evans Mulongwe and the Masiye Band, the Uweka Band, Papa Kado, Max Mwansa and the Black Power Band and New Age.
If you want, you can also add gospel musicians as a thread on its own. And there, you can have names like Mr Fortune, Karen, Suwilanji, Ephraim, Kings, the Ngosa Brothers, Mweshi Mulusa, Roberta, Mount Sinai Choir and Heritage Singers.
After the domination of airwaves by foreign music, there came what has been called a renaissance of Zambian music towards the end of the 90s which involved Mondo Music, Muvi Studios and names Daddy Zemus, Black Muntu, JK, MC Wabwino, Nasty D, Shatel, the Muvi Posse and Danny among others.
More recently, there has been the likes of Mozegeta, Petersen, Pilato, Kâ€™Million, Slap D, Macky II and Mampi and dominating the airwaves.
Sorry, there is Belinda Nafwa by Chester.