THE Society Business Park in Lusaka is in the news again for all the wrong reasons.
Last year, there was an alarming report about the strength of the structure, which stands on Cairo Road in the central business district.
The report was to the effect that one of the main pillars that holds a part of the multistorey building was not built to standard, thereby risking the whole building.
This was after cracks appeared in one section of the ground floor of the building.
However, a study by the Engineering Institution of Zambia (EIZ) has now revealed that it is not one, not two, but 1,200 of the total 1,600 pillars that prop up the building that do not meet the standards in the construction of such buildings.
EIZ president Abel Ng’andu said yesterday when he met President Edgar Lungu at State House that the technical audit tested about 1,600 columns, out of which 1,200 failed in strength.
The EIZ is now recommending that the building be shut down because of the risk it poses to the thousands of people who use it every day.
To think that a project of this magnitude, costing over a hundred million dollars, could have such lapses is in itself a scandal.
But the question we ask is, how did we not see and stop this from the beginning? Did we have to wait until the paint on the structure dried, and the clients moved in?
President Lungu also questioned the integrity of other projects, such as the Kafue Bulk Water project, whose works he said are poor, and the Ndola Lime (where Government lost about US$100 million).
We agree with the President that the indictment in this matter is on the EIZ itself and its members.
This is because the integrity of any building does not stand on the strength of the type of blocks used to build it, but on the integrity of the engineers working on the project.
It is not the materials used in a building that compromise the strength of the structure, but it is the people in charge that do.
President Lungu is, therefore, right to call for punishment on engineers who are negligent.
We have seen what happens in other civilisations where engineers get arrested and prosecuted after a building collapses. Some have actually gone to jail for many years.
This is because with engineering, the cost of compromise is usually death of innocent lives.
In fact, the compromise in such cases starts at the awarding of contracts.
Anything that is birthed out of corruption becomes corrupt in one way or another, because the people who are supposed to be in charge lose the moral ground, and have to cover up their evil deeds in one way or another.
Zambians should not be a people who wait for disaster to happen, but must be proactive and prevent building disasters ourselves.
Those in charge should build with future generations in mind. That is what a nation that has foresight aims to achieve, and that is what the EIZ should help Zambia achieve.
Government has invested huge sums of money in many infrastructural projects, but all that goes to waste if the quality of works is poor because a few individuals were either selfish or negligent in the process.
It must end here and now! 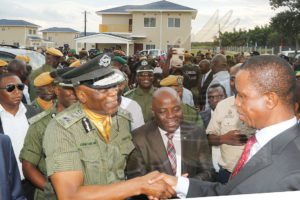 This is what friends do
Cadres should behave