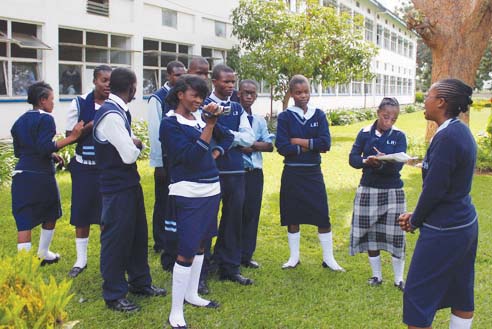 Empowering youths with knowledge on sexuality

LINDA NYONDO, Lusaka
THE one-week training on comprehensive sex education for members of the media from different parts Africa was an eye-opener. It put the spotlight on the importance of people understanding what sex education is all about.
When comprehensive sex education was introduced, participants thought they knew exactly what it was until the facilitator, Safaids Zambia country representative Chrispin Chomba, explained what it is about and how it impacts on our lives.
In Zambia, sex education is an age-appropriate, cultural relevant approach to teaching about sex and relationships by providing scientifically accurate, realistic, non-judgemental information.
It was supposed to be introduced in schools in 2014, but has not yet been implemented because many teachers have not been trained to deliver the lessons.
UNESCO, in partnership with the government, decided to introduce sex education because it provides an opportunity to young people and adolescents to explore oneâ€™s own values and attitudes and build decision-making, communication and risk reduction skills about many aspects of sexuality.
Zambia is among countries from eastern and southern Africa which signed a ministerial commitment on comprehensive sex education, sexual and reproductive health services for adolescents and young people to promote the roll out of comprehensive sex education in eastern and southern African countries.
The need to introduce sex education in schools and to-out-of-school adolescents and young people is a result of the statistics by UNESCO, which states that every hour, 52 young people get infected with the HIV in eastern and southern Africa.
UNESCO further states that 60 percent of those infected are young women.
Mr Chomba said young people have to understand the body anatomy if they are to protect themselves from getting infected with HIV and to prevent early pregnancy.
He said sex education is important for people of all ages, including adults because it addresses the sexuality of a person.
During the media training, it was pointed out that one Zambian tribe; the Bembas, had a traditional way of teaching comprehensive sex education to young people.
And that this was done by elders in the communities who would sit in a hut with their grandchildren and talk to them about their sexuality.
However, the high HIV prevalence and pregnancy among young people and school drop-outs is a clear indication of the breakdown in a traditional way of life where the extended family system was strong and uncles, aunties and grandparents would take up the mantle and educate young people on sexuality.
To bridge the gap, UNESCO decided to introduce sex education that will take up the parenting challenge of educating young people on the importance of understanding their body changes and the reality that they are sexual beings.
UNESCO and its implementing partners plan to engage the media, civil society and Government to reach out to young people.
UNESCO believes that young people have the right to live full and healthy lives and to have control over their own sexuality and health.
The in-school curriculum and the out of school curriculum on comprehensive sex education is aimed at reducing infections and early pregnancy among people aged between 15 to 19 years.
It also aims to educate adolescents and young people on sexual and reproductive health and sex education.
â€œRemember, in the absence of a cure, education is the only key vaccine available. Since December 2013 when ministers of health and education from eastern and southern Africa region endorsed the ESA Commitment.
â€œUNESCOâ€™s role as a convener and facilitator has enabled us to bring partners together for the benefit of our young people,â€™â€™ UNESCO regional HIV and health education advisor Patricia Machawira said.
Dr Machawira said UNESCO believes that those in education must do their part by delivering evidenced-based, age-appropriate and culturally sensitive programmes that respond to the real needs of adolescents and young people.
This can be done by empowering principals and teachers with the skills they need, and by engaging parents and communities to build support.
â€œUNESCO recognises the importance of involving parents and community members when addressing a complex issue such as sexuality education,â€™â€™ she said.
UNESCO has been working hard to ensure that a quality CSE framework is in place and is being implemented in each of the 20 countries.
â€œPre and in-service sexual reproductive health training and comprehensive sex education training for teachers, health and social workers are in place and being implemented in all 20 communities,â€ UNESCO representative Mwansa Kaira said.
She said UNESCO is working towards ensuring that by end of 2015, more young people and adolescents have access to sexual and reproductive health services, including HIV that are equitable, accessible, acceptable, appropriate and effective.
The meeting was held to impart knowledge to members of the media who will help to disseminate information on why UNESCO and African governments have decided to introduce sex education in the school curriculum.