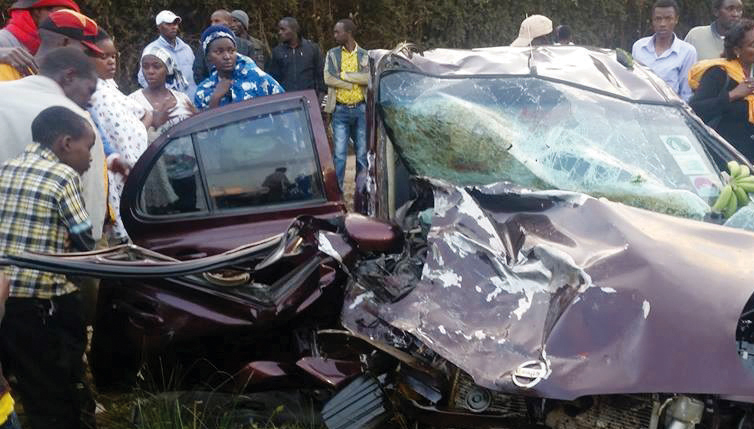 KELVIN KACHINGWE, Lusaka
ON AUGUST 16, days after President Lungu was declared duly- elected by the Electoral Commission of Zambia (ECZ) chairperson and returning officer Esau Chulu, the Zambia Road Safety Trust (ZRST) appealed to the President-elect to prioritise road safety.
â€œPolitical will is needed by the President-elect to ensure appropriate road safety legislation and stringent enforcement of laws by which we all need to abide. We call for capable leaders, institutions and strategies that can ensure reduced likelihood of accidents occurring and minimise the severity if a crash occurs,â€ ZRST chairman Daniel Mwamba said in a statement.
â€œIf this cannot be ensured, families and communities will continue to grieve and our health systems will continue to bear the brunt of injury and disability due to these road accidents.
â€œThe Zambia Road Safety Trust would like to appeal to the President that having been given a new mandate by the Zambian people, he appreciates that road death and injury is not inevitable. Road trauma is a preventable public health challenge, which can be halted with amenable actions.â€
Well, going by his inauguration speech, President Lungu is certainly prioritising road safety.
â€œThere is a dire need for us to improve in our discipline in all the things we think, say and do. I plan to introduce ultra-modern radar-based technology to help control reckless behaviour on our roads in order to curb the ever increasing traffic accidents,â€ the President said in his speech at National Heroes Stadium.
â€œRoad traffic enforcement agencies will work closely with my office to install this technology. No life must be lost needlessly on our roads.â€
The announcement by President Lungu has been welcomed by the ZRST, which has been asking government to come up with coherent, evidence-based interventions that can effectively address these traffic accidents.
â€œThe trust welcomes His Excellency, the President of Zambia Mr Lunguâ€™s call for tough measures to stop the increase of road accidents during his inauguration speech, especially that most of the measures that have been put in place by Government in the past five years, have not adequately addressed road safety,â€ ZRST communications and programme manager Mailos Mwale said in a statement.
â€œWhile, itâ€™s the responsibility of every road user to act responsibly on the road, the government holds the utmost responsibility to protect all of us on the road.â€
President Lungu may not have elaborated much on road safety in his speech, but the fact that it was even mentioned in his inauguration speech shows that he is indeed putting road safety as one of his top agendas.
Just two days after his speech at National Heroes Stadium, 25 people, including a Road Transport and Safety Agency (RTSA) manager and two fire fighters died on the spot in two related accidents in Serenje on the Great North Road.
It prompted Vice-President Inonge Wina to direct the Ministry of Transport and Communications to ensure that a Statutory Instrument 9SI) be signed on banning movement of public transport vehicles at night.
The RTSA employee and the two fire fighters had rushed to the scene of the first accident in which 22 people had died on the spot after a 70-seater Kitwe-bound Power Tools Bus Services Scania bus in which they were travelling overturned at Mbaswa junction.
Figures from the Zambia Police indicate that some 2,100 persons in Zambia are killed each year in road crashes and a further 10, 000 are injured.
The ZRST, a non for profit organisation that seeks to create awareness on road safety and contribute towards reduction in road traffic crashes, injuries and fatalities, says these numbers are likely to almost double by 2020 unless urgent action is taken.
â€œA prevalence of under-reporting of serious crashes means that the actual number of deaths is likely to be much higher than that reported by the police,â€ the organisation says.
â€œAnd according to the Central Statistical Office (CSO), between 2010 -2012, injuries and road traffic accidents were the third ranked cause of deaths, accounting for almost 10 percent of all fatalities in Zambia.
â€œAt present trends, with no effective mitigation, we project that within the next four years, road traffic injuries will rank as the second leading cause of death in Zambia after HIV/AIDS, killing more than double the current number.â€
The CSO annual report for 2014 says while, over half of Zambiaâ€™s road deaths are vulnerable road users such as pedestrians, bicyclists and motorcyclists, the majority of those killed are men between the ages of 15 and 44, mostly breadwinners.
The ZRST is deeply concerned with these statistics.
â€œRoad accidents are often covered in the media simply as eventsâ€”not as one of a leading killer of people and an enormous drain on a countryâ€™s human, health and financial resources,â€ the ZRST chairman says.
â€œIn addition to the tremendous traumatic and emotional impact of road crashes, there is a vast economic consequence. Nationally, road crashes typically cost the equivalent of one to three percent of our countryâ€™s gross domestic product. Personally, road crashes can be the trigger that plunges a family into poverty. Every case involves someoneâ€™s life, their family and friends, and personal suffering.â€
That is why the plan by President Lungu to introduce ultra-modern radar-based technology to help control reckless behaviour on roads is welcome.
It will help save a life.