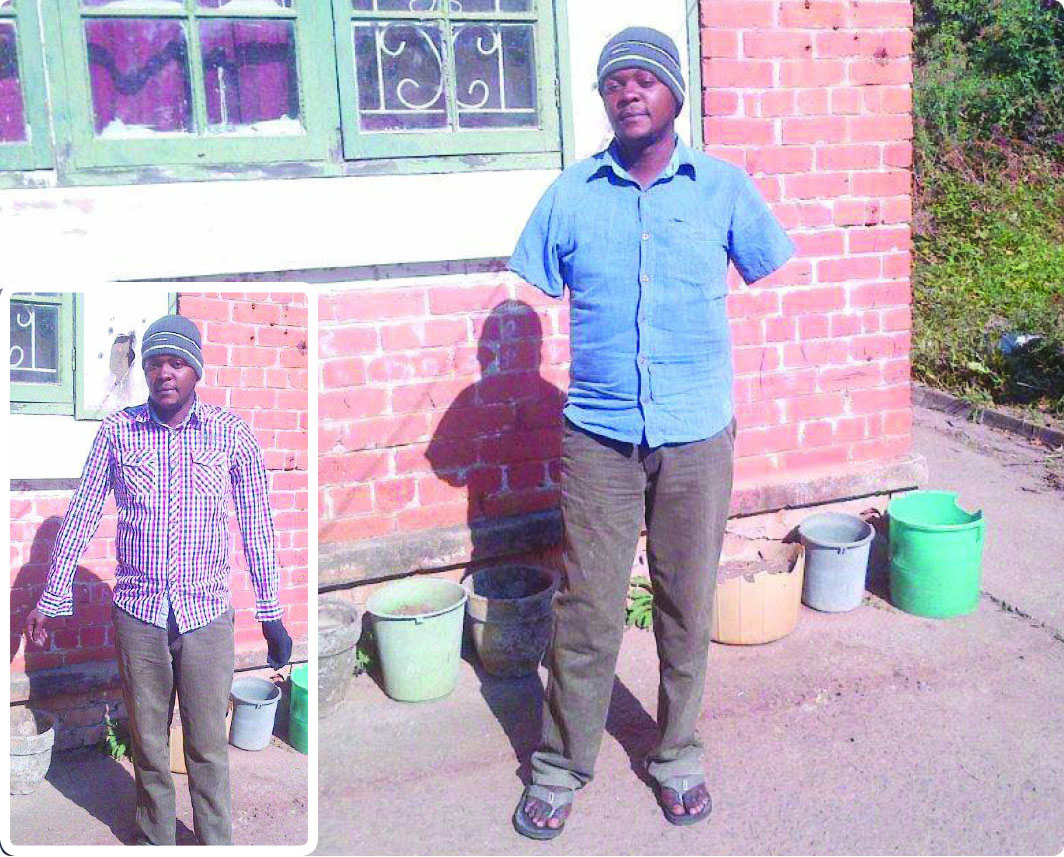 By LILLIAN MUSENGE
WHEN 31-year-old Diquence Mwaka took a stroll to a social gathering in the evening of June 1, 2013, he had no idea it was the last time he was lifting anything with his two arms.
A few metres from home, the father of two suddenly saw an over-speeding car careering off the road and targeting him. Before he knew it, he was hit, trapped underneath the car and dragged for a distance of about 500 metres before the vehicle came to a stop.
â€œFrom that time, things became very difficult. I sustained very serious body injuries and was hospitalised for over 10 months during which I had both arms amputated,â€ recollects Mr Mwaka, a resident of the mining town of Mufulira on the Copperbelt Province.
Losing any part of your body can be quite traumatic and at the same time life-changing. With two arms missing from his body, Mr Mwaka soon found himself unable to handle various tasks that he would easily undertake prior to the accident.
He also became the centre of attraction wherever he went. People would always turn to stare at him as he walked the streets of Mufulira. While some sympathised with him, others would pass witty comments which did little to aid his coping with the condition.
â€œThe past one year has been very trying. I didnâ€™t just lose both arms and one ear forever, but I lost other things like friends and actually my entire social life was gone. It has been very difficult for me to move in public amid questioning stares from people, especially children,â€ he laments.
Fortunately for Mr Mwaka, those questioning stares may not haunt him for too long. This follows a benevolent act by Mopani Copper Mines Plc to help him with artificial limbs. An artificial limb is a type of prosthesis that can replace a missing limb; be it an arm or a leg.
Mr Mwaka is one of the three Mufulira-based amputees whom Mopani recently helped to acquire artificial limbs from Lusakaâ€™s Italian Orthopedic Hospital. Mopani spent in excess of K27,000 to ensure the three men once again have a positive outlook on life after having gone through the agony of amputation.
According to Ronny Cheelo, the medical manager for Mopani Copper Mines, the artificial limbs on the three men should be able to act as a catalyst to stir up their social and economic lives.
â€œThe fitting of artificial limbs on all the three was successful and we are hopeful that these artificial limbs will now add value to their daily lives in that not only can they be used for cosmetic purposes, but [they] also boost a personâ€™s ego,â€ comments Dr Cheelo.
In describing the value that the artificial limbs have added to his life, Mr Mwaka says the gesture has helped reduce the stares from the community and raised his confidence levels.
â€œI am grateful for this gift from Mopani. The company has been like family for me ever since I had the accident,â€ recounts Mr Mwaka.
â€œThese artificial limbs have changed my life in that I can move in public, away from the curious public gazes. I can at least now move around without worrying about the onlookers because with them [limbs], I now appear normal.â€
His father, Stephen Mwaka, who has been following the health of his son with keen interest ever since the accident occurred and subsequent admission to Malcom Watson (Mufulira) and Wusakile (Kitwe) hospitals, thanked the mining company for the assistance rendered to Mr Mwaka.
â€œMopani has been very supportive just from the time my son had the accident last year, and now the company has helped him with artificial limbs. We are very thankful as a family,â€ he says.
Mopani, which runs two ISO 9001 certified hospitals â€“ Malcom Watson and Wusakile â€“ as well as seven community health clinics and First Aid centres in Kitwe and Mufulira, spends in excess of US$20million (K123 million) every year on healthcare services and donations.
Since inception in 2000, the company has spent over US$150 million on running the health facilities, which continue to provide general and specialised medical services to both Mopani employees and the general public.