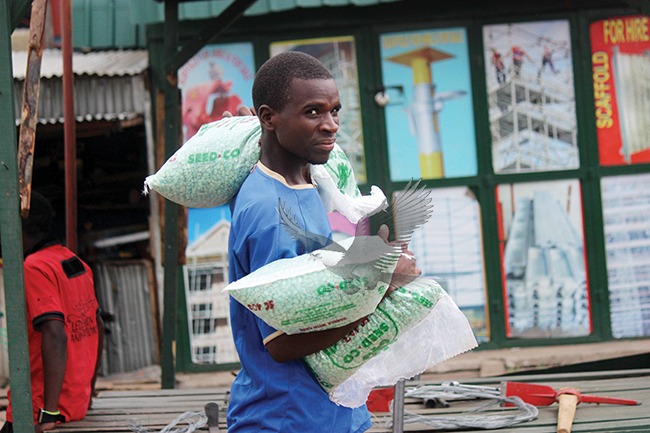 VIOLET MENGO, Lusaka
IN AN effort to improve the delivery of subsidised farm inputs, the Ministry of Agriculture introduced the electronic voucher (e-voucher) system last year to enable small-scale farmersâ€™ access inputs under the Farmer Input Support Programme (FISP).
The e-voucher system allows small-scale farmers to access farm input such as seeds, fertilisers and herbicides using electronic cards that are loaded with cash amounting to ZKM1, 400. In the 2016/2017 the e-voucher amount per farmer has gone up to K2,100.
The e-voucher scheme aims at ensuring transparency and expeditious management of the FISP. According to Government, the introduction of the e-voucher system was meant to save resources through elimination of costs of procurement, transportation and others associated with FISP administration.
The initiative, which was launched by President Lungu in Kalomo in 2015, was piloted in 13 districts across the country during the 2015/2016 farming season.
The system requires agro-dealers to have an electronic swiping machine to enable small-scale farmers access farm inputs, equipment, livestock feed and vaccines from their shops.
It is the first time under the FISP that farmers have been able to access a wide range of agricultural inputs as well as livestock of their choice.
Farmers are given a card which they use to redeem inputs with a K400 payment upfront.
By so doing, the programme is helping Government do a proper targeting of farmers who benefit, thereby reducing transportation costs and relieving Ministry of Agriculture staff the burden of paperwork.
The e-voucher system also entails that they is no physical warehousing of farm inputs.
And President Lungu during the launch of the e-voucher stated that the agriculture sector has a lot of potential for growth.
He expressed desire to see the agriculture sector become the mainstay of the economy and do more to help poverty reduction efforts. And on many occasions, President Lungu has called on Zambians to venture into agricultural production.
Poverty has continued to be one of the greatest challenges Zambia is facing.
According to the Living Conditions Monitoring Survey (2016), the average national poverty level is estimated at 54 percent, while in rural areas it is about 77 percent.
Given that the highest levels of poverty are in the rural areas and agriculture being an important source of livelihood for most rural communities, Government has prioritised support to the agriculture sector to reduce poverty and enhance household social security.
Through the e- voucher, it is expected that farmers will graduate from dependence on rain-fed agriculture and engage in commercialised all-year-round farming.
For the 2015/16 farming season, the Ministry of Agriculture distributed 219, 891 cards out of the 241,041 that were produced. The rest of the cards were not distributed initially due to death and relocation of intended beneficiaries.
For the 2016/2017 agriculture season, Government is rolling out the e-voucher to 39 districts, in addition to the 13 districts where the programme was piloted in the 2015/2016 farming season.
Minister of Agriculture Dora Siliya told Parliament recently that 607,521 farmers will be provided with subsidies under the e-voucher system at a total cost of K1,024 billion.
â€œThe Governmentâ€™s contribution to the subsidy under the e-voucher is K1, 700 per farmer and the farmer contribution is K400. Each farmer is able to redeem inputs worth K2,100,â€ Ms Siliya said.
The minister said this season, 422 agro dealers have been registered to participate in the programme in 39 districts across the country. The chosen agro dealers were selected through a competitive national tender process.
In addition, Zanaco, Barclays, Ecobank, Banc ABC and United Bank of Africa (UBA) have been contracted to print 368,832 visa cards for the newly included districts.
Ms Siliya said Government has made a commitment to making agriculture the anchor of economic growth.
It is expected that with the successes being recorded so far, Government will continue to scale up the e-voucher system throughout the country.
And Government has been making strides in the delivery of farm inputs, a development the minister said is a major milestone to the realisation of the commitment and timely payment of farmers.
â€œIt is for this reason that our policy has shifted to removal of consumption subsidies in the maize value chain to allow for cost reflective farmer rewards and economic efficiency in the agriculture sector,â€ Ms Siliya said.
Currently, the number of farmers with active visa cards has gone up to 233, 689. And a total of 117, 832 new visa cards for the districts that have come on board have been printed out of the target of 368,832 small-holder farmers. The balance of cards was being printed by participating banks by last month when Ms Siliya delivered a ministerial statement in Parliament.
The implementation of the e-voucher system in the 13 pilot districts in the 2015/2016 helped to reduce Government expenditure on the FISP.
It also showed the existence of about 20,000 ghost farmers who were scrapped off from the beneficiary list.
The e-voucher system has given farmers the freedom to choose what to plant and options of buying livestock and medicines for livestock.
Despite the successes scored, the system faced challenges including the sudden rise in the price of fertilisers, resulting in Government having to source for additional funding to increase its contribution on the cards.
Load shedding also affected the timely transmission of data from districts.
The advantage of the e-voucher is its prompt payment to the agro-dealers.
It also replaces and enhances previous voucher systems that worked using paper vouchers.