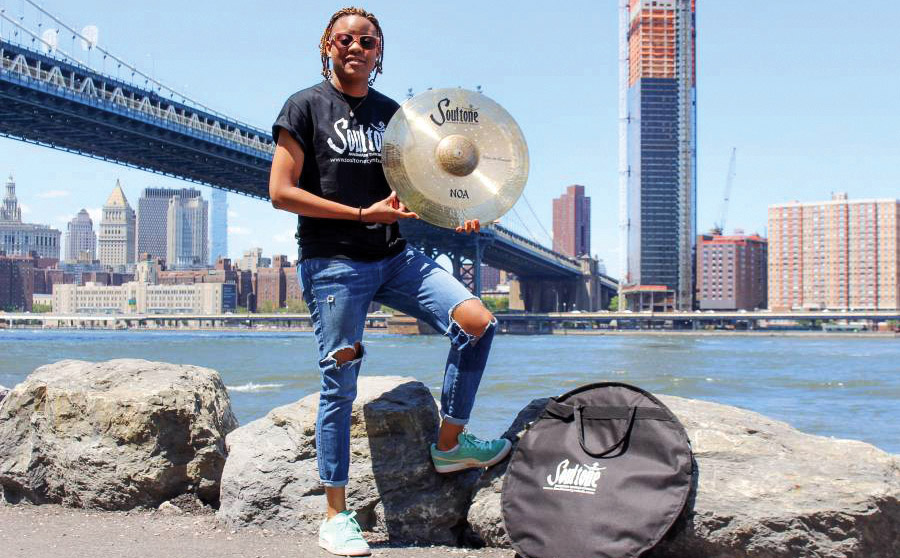 ZIO MWALE, Lusaka
NOW aged 27, she is an award-winning drummer who has played for the likes of Ephraim, Esther Chungu, Go Center Choir, Mikrophone7, Mag44, Pastor Israel, Les Diplomatique, Chileshe Bwalya and the St. Ignatius Choir, which she travelled with to Sweden.

A self-taught drummer, Deborah Yambala is currently studying finance at Borough of Manhattan Community College in New York, United States of America.
However, the award-winning drummer is Zambian-born and bred.
Prior to attending Borough of Manhattan Community College, Debbie, as she is often called, went to Chengelo School, where she graduated in 2008.
Debbie started playing drums in church, where she nurtured her gift.
“I first started playing drums when I was fourteen. I fell in love with the idea of making music and was determined to learn more about the instrument,” she says.
“First, I started as a substitute drummer at Go Center Church in Lusaka. From there I went on to play at Jesus Worship Centre Church, where I grew further as a musician.”
After graduating from high school at Chengelo, she was given an opportunity to intern as a music assistant teacher teaching for 18 months until she moved to New York City in 2012.
By then, she had almost done it all, playing with a number of established gospel musicians.
“My first big moment as a real musician happened in 2012 when I toured Sweden with the St. Ignatius Choir,” she says. “It is at that event where I got to perform in front of thousands of people. That tour remains the most amazing experience of my life.”
In 2016, she was awarded the Mwape Peer Talent Award. This was to recognise her as an emerging female drummer in various music genres.
Today, after being endorsed by Soultone Cymbals, a major drum company in New York, she now plays for Robert Mwama, a renowned jazz artiste, P Diddy, the United Nations in-house band, Brooklyn Tabernacle Kids and other notable famous Broadway singers in New York.
“Being a drummer is generally considered a hobby, it’s not considered a career on its own, especially in Zambia,” she says. “When I moved to New York City to study finance, I was initially overwhelmed with the opportunities to learn and grow in music.”
In the United States, Debbie plays in a band called Handmade and despite being a self-taught drummer, she has shown excellence and diversity in her skill and she is always looking to expand her musical edge.
“I realise, though, every day that this is New York, and every day, I strive to be bigger and better,” she says. “The gigs I have already played don’t really matter. It’s all about the next one.”
For Debbie, last year was amazing for her career growth. The year has enabled her to play for famous Broadway singers like Cheryl Freeman, Tony Award winner Cady Huffman, Erik Liberman, Michael Musto and Justin Sams.
“It’s amazing,” she says. “All I could think was me; Debbie Yambala was going to play my drums in front of a real live crowd in New York City, I was going to be swimming with the big fish! I was terrified, nervous and excited at the same time.”
Debbie’s first major paid event was a show organised by the United Nations, which has an in-house band that performs at some of their events. Debbie was their drummer for about six of their performances.
“I am always a little nervous before I walk on stage. At the same time, I am excited,” she says. “The size of the crowd doesn’t even matter. The feel of the sticks in my hands, the vibration as I pound out the rhythm helps me play.”
Debbie’s genres range from R&B to gospel, hip-hop, rock, funk, samba, South African kwaito, jazz and Congolese rhumba.
On how she is balancing the two, drumming and school, Debbie says at the beginning it was challenging for her to strike the balance.
“Keeping my grades up to maintain my scholarships as well as constantly striving to learn a new technique and keep sharpening my skills were a very exhausting to balance,” she says. “But it all worked out.”
Despite not being supported by many in her early days, Debbie has persevered and become one of the very first Zambian drummers to be endorsed by a well-known drum company.
Not only has she excelled at drumming, she is mastering the art of multi-tasking with school and drumming, which has brought her the opportunity to make an income.
As a woman, Debbie has shown no limits and has been a great example to the youth in showing them that gender and background hold no boundaries.