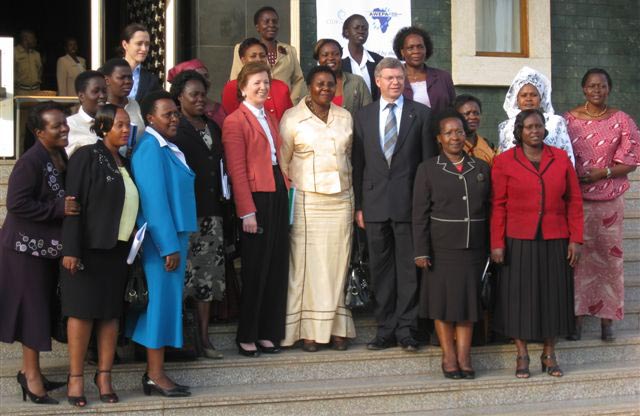 CHAMBO NGâ€™UNI, Kabwe
ONE of the most important physiological needs of a human being is clothing. At primary level humans dress to cover nakedness and keep warm while at secondary level dress to enhance appearance in a given social setup.
And in a bid to enhance their appearances most women in Zambia today are spending a lot of money on latest clothes and shoes.
Despite the growing demand designer clothes, stylish shoes and handbags are readily available locally or can be imported from Asia and Europe among other regions.
Better still, some women opt to have their garments tailored locally according to their specifications.
Women have also embraced different hairstyles to enhance their looks.
However, in a bid to embrace modernity, the most important function of dressing, which is upholding human dignity, is being eroded, especially among the womenfolk
In the public service particularly, there have been concerns that certain modern types of clothes for women conflict with the dressing etiquette.
In Kabwe, some female civil servants were allegedly reporting for work dressed in mini dresses and skirts, skin jeans, leggings and revealing tops.
But Central Province permanent secretary Edwidge Mutale says tight or revealing clothes are not in accordance with the dress code in the public service.
â€œWe are all civil servants,â€ Ms Mutale said. â€œIt is our right to wear what we want but we should wear decent clothes that will not injure the public.â€
Ms Mutale recently addressed some female civil servants at Boma Conference Hall in Kabwe against the backdrop of complaints of improper dressing among some workers.
â€œWe need to respect ourselves and our bodies in the way we dress, and know the clothes that are suitable to wear for work,â€ she said.
Ms Mutale added that: â€œEveryday, we are seen in public and, if we do not dress properly, what will people say?â€
She noted that certain types of clothes some women wear at work are appropriate at social functions.
Nurses and female workers in defence and security wings are also expected to dress as their job description detects, Ms Mutale emphasised.
Beauty Phiri (pseudonym) notes that some workers whose dressing was questionable have improved after Ms Mutale held a meeting on August 20, 2014.
Ms Phiri singled out young workers as the ones who tend to wear â€˜unacceptableâ€™ clothes at work.
â€œSome have not charged even after the PS (permanent secretary) held that meeting,â€ Ms Phiri bemoaned.
â€œWe are still seeing some young women dressing in minis.â€
As a civil servant who has worked for many years, it is sometimes embarrassing to see the manner some civil servants dress at work.
â€œYes, they want to dress well,â€ Ms Phiri said, â€œbut they should exercise caution in the manner they dress at work.â€
And executive director of Afro Multi-Media Productions Karen Nakawala notes that â€œIt is not right to go for work in tight or revealing clothes-even in shorts skirts.â€
Ms Nakawala believes that when people are employed in the civil service, they are also oriented on the dress code.
â€œThe employer handbook should have information on the dress code,â€ Ms Nakawala said. â€œSo workers will know from the onset what would be expected of them.â€
Ms Nakawala, however, notes that some types of clothes deemed inappropriate in the civil service can be acceptable in some private sector organisations.
She also cautioned nurses and females workers in security and defence wings against turning their uniforms into minis.
â€œIn case they need to alter their uniforms, their skirts should not be too short or tight.
â€œIf you are required to wear uniforms, you need to respect what your profession and your organisation expects of you,â€ she said.
According to Ms Nakawala in an environment where fashion trends are evolving fast, civil servants do not want to be left out.
Because of media frenzy on latest clothes, some women are influenced into believing that unless they buy certain type clothes, they will not look pretty or sexy.
For Zambia Congress of Trade Union (ZCTU), civil servants are expected to be conversant with the expected dress code in the civil service.
â€œThe dressing of civil servants should not leave question marks,â€ ZCTU Kabwe district chairman Emmerson Pukuma says.
Civil servants, Mr Pukuma said are expected to dress properly at work.
â€œIt should be the kind of dressing that is according to the job description,â€ he said.
In the case of teachers, Mr Pukuma said they are role models to pupils and therefore they need to be mindful of the clothes they wear at work.
â€œChildren copy a lot from teachers. They shouldnâ€™t dress in a manner that exposes even their bellies to pupils.
â€œThere are also some male teachers who pull their trousers down but they must properly be dressed because we are teaching future leaders,â€ Mr Pukuma an educationalist said.
And instead of condemning workers over perceived improperly dressed, Ms Mutale says the solution is to engage them.
After the August 20, 2014 meeting, Ms Mutale is happy that dressing has since improved.
â€œItâ€™s not that some of them were scantily dressed but they were in wrong attire because what would go for a kitchen party would not go for the office,â€ She said when she featured on KNC Radio.
Civil servants, she said should differentiate between formal and causal dressing.
And, Ms Nakawala said the dress code in a workplace should be well defined so that workers know what type of clothes and shoes to buy.
Ms Nakawala said the overriding factor in being trendy and looking presentable is to exercise self-respect.

Power of serendipity: Stumbling upon success
â€˜I was infected with HIV at 3 monthsâ€™