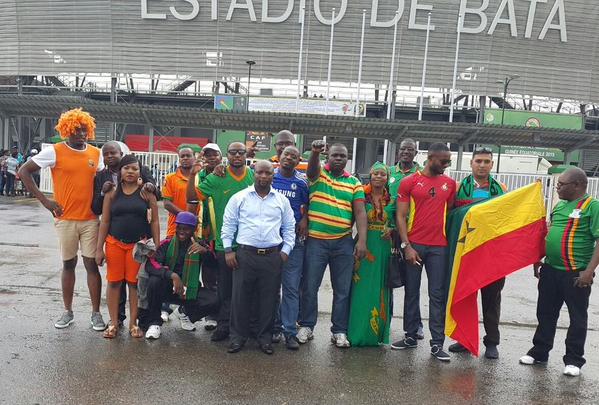 â€¢Samsung Promotion makes fans dreams come true
SAMSUNG recently ran a â€œDream Big promotionâ€ where some customers won an all expenses trip to go and Watch the Final of the Orange Africa Cup of Nations played between Ivory Coast and Ghana.
The company was the official sponsor of the Orange Africa Cup of Nations (AFCON) Equatorial Guinea 2015, which took place from the January 17 to February 8, 2015.
A group of 18 customers and partners left Lusaka on Thursday February 5 and returned on February 11, 2015. Samsung retail manager Jonathan Nsama, who led the team to Equatorial Guinea, had an opportunity to present the Samsung Fair Play Award for the Match and Tournament to Wilfried Bony of Ivory Coast and Ghanaâ€™s Kwesi Appiah respectively.
The â€œDream Big Promotionâ€ was part of Samsungâ€™s commitment to bring football fans closer to the beautiful game and create excitement amongst communities during the Orange AFCON 2015. The promotion was run through all Samsung Brand Store and other retail outlets across Zambia.
Samsung Electronics business leader James Chona said Samsung was happy to have made the dream of some of its customers come true through the promotion.
The opportunity to watch the Africa Cup final is a once in a lifetime opportunity and according to Collen Banda who travelled with the team it was indeed a dream come true.
Banda also believes Zambia should host the Africa Cup final, â€œAs a football loving country, Zambians should experience the tournament at least once. I was part of group that was sent to Equatorial Guinea, we saw how football makes a meaningful connection with people from all walks of lifeâ€, Banda Said.
Besides the trip to Afcon, Samsung also had the â€œI See Your Dreamsâ€ initiative with Christopher Katongo and donated sports equipment to Matero Boys and Munali Secondary schools. The two teams played an exhibition match at the Olympic Youth development Center and later joined Christopher Katongo and Samsung staff to watch the game between Zambia and Tunisia. Samsung has also partnered with Kennedy Mweene who was recognized for his individual commitment to the sport and worked hard to make his own dreams come true.
Giving inspiration to young Zambians is the focus of Samsung Electronics in Zambia and this has been evidenced with the partnership with the Football Association of Zambia to sponsor the Futsal league in 2012 and also partnered with Airtel in the Airtel Rising stars in 2013. â€“ SAMSUNG.