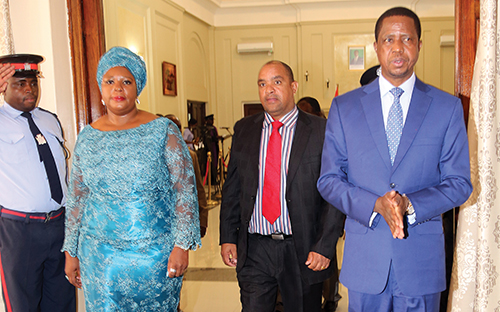 ALVIN CHIINGA, Lusaka
PRESIDENT Lungu has appointed Petauke Central member of Parliament Dora Siliya as Minister of Energy and Water Development and immediately directed her to ensure that Zambiaâ€™s energy challenges are addressed by early next year.
And President Lungu has announced that deputy ministers will now attend Cabinet meetings starting next Monday.
President Lungu was speaking during the swearing-in ceremony at State House yesterday for Ms Siliya and Livingstone Central member of Parliament Lawrence Evans as Deputy Minister of Livestock and Fisheries.
President Lungu said Zambia has been hit by a critical energy crisis which needs to be addressed quickly.
â€œThe country has been besieged by a critical shortage of energy because of lack of growth in the sector for the last 15 years or so, and this energy crisis should be sorted out by January, February or March next year and we should also be able to export electricity,â€ he said.
He urged Ms Siliya to work with her permanent secretary saying that he was confident that she was equal to the task.
He also urged the two ministers to implement what he said in the speech he presented to Parliament during the opening of the Fifth Session of the 11th National Assembly on September 18, 2015.
â€œWe should be committed to implementing what we say and should walk the talk. I have chosen you two because I know that you will be able to implement the speech because you are hardworking. I have also chosen a woman because I want to work with women,â€ he said.
President Lungu said the issue of deputy ministers not attending Cabinet meetings, which was first tabled in January this year, has finally been resolved as space has been found for all ministers to be in the meetings.
He said this platform will make it possible for the deputy ministers to answer questions.
The President said the deputy ministers will now be efficient because they will be contributing during the meetings.
Speaking after the swearing-in ceremony, Ms Siliya said her first assignment would be to ensure that the energy challenges the country is facing are reduced.
Ms Siliya said that she was humbled by the confidence President Lungu had shown in her by appointing her as Minister of Energy and Water Development.
She served as minister of Communication and Transport and Education as well as MMD spokesperson up to 2011 when the then ruling party lost the general elections to the Patriotic Front.
President Lungu has also directed Mr Evans to fully use water bodies to improve the output of fish in the country.
Mr Evans said that he would take President Lunguâ€™s directive seriously so that the fisheries and livestock sector is revamped in the country.