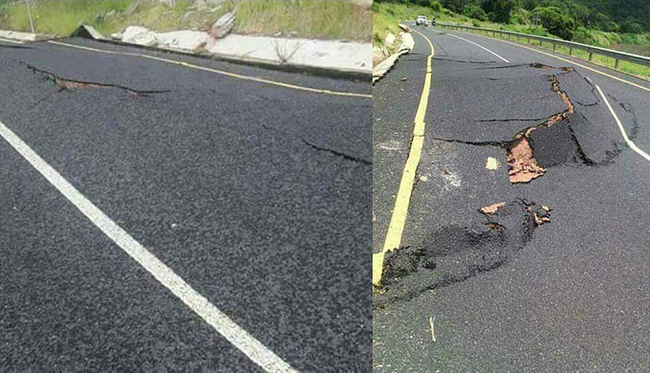 ARTHUR MWANSA, Luangwa
GOVERNMENT has commended stakeholders for their quick response to the natural disaster in which about 300 metres of the Luangwa-Feira road has been damaged.
Lusaka Province Minister Japhen Mwakalombe said Government, through the Disaster Management and Mitigation Unit (DMMU), has so far acquired four speed boats and life-saving jackets to ensure travellers to and from Luangwa and Feira are not stranded.
About 300 metres of the Luangwa-Feira road has been damaged as a result of natural earth movements, prompting authorities to temporarily close it for the safety of users.
China Geo is building an alternative road as a temporary measure while Government is working on a permanent solution.
â€œMy impression is that, first and foremost, this is a serious disaster. However, as Government we have also responded timely. I am happy that all the other stakeholders have responded well. The DMMU is here and the Road Development Agency (RDA) has also been here and the assessments have been done,â€ Mr Mwakalombe, who is also Chongwe member of Parliament (MP), said.
He said this on Friday when he visited the scene in the company of his deputy permanent secretary, Josephat Lombe, Rufunsa district commissioner Judith Chama, DMMU regional coordinator Titus Ngâ€™andu and Luangwa district commissioner Ngoni Moyo.
Mr Mwakalombe said the contractor, China Geo Construction, had been on site to conduct a survey so that an alternative route could be worked on as soon as possible.
â€œAs Government, our role is to ensure that the people of Luangwa and Feira in particular are not completely cut off from the rest of the country. Our first short-term measure, as you have seen, is that we have procured four speed boats which are going to help in ferrying people in and out of Luangwa,â€ Mr Mwakalombe said.
He said he was also aware that the contractor would take about 10 days to complete works on the alternative detour to make Luangwa and Feira accessible.
Mr Mwakalombe said according to preliminary investigation the damage to the road was a result of the heavy rains which had created a six-metre crater on top of a hill which was exerting pressure on the road.