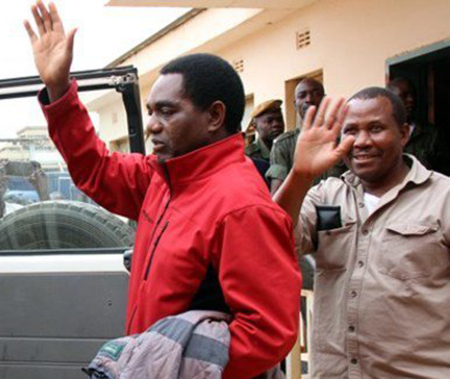 CAROLINE KALOMBE, Lusaka
THE State has urged the Constitutional Court to dismiss the application for bail and compensation by United Party for National Development (UPND) president Hakainde Hichilema and five others describing the action as “forum shopping” and multiplicity of actions.

This is in a case in which Hichilema, Hamaleka Hamuchinde, Hachinda Muleya, Laston Mulilanduba, Pretorius Haloba and Wallace Chakawa are jointly charged with treason and were last week committed to the High Court for trial.
The six want to be released by the Constitutional Court on bail and compensated for their arrest pending trial.
When the case came up for hearing before a full bench of the Constitutional Court led by president Hildah Chibomba, Attorney General Likando Kalaluka said forum shopping was an abuse of the court process and did not apply to matters before the High Court only.
He noted that a case should be heard by a sole judge and that this is to avoid conflicting decisions and bringing embarrassment to the court and the judicial process.
Mr Kalaluka submitted that two matters with the same facts and remedies could not be brought before different courts because there was a potential of providing conflicting decisions and embarrassment to the court.
He noted that the Constitutional Court could interpret the entire Constitution and pronounce itself on the Bill of Rights.
Therefore, Mr Kalaluka said, Hichilema and the others could not go before two different courts seeking the same remedies based on the same facts.
But Hichilema’s lawyers said there was no multiplicity of action because the issues their clients wanted were the same.
They argued that having the same remedies did not amount to multiplicity of actions.
They submitted that courts did not provide remedies in a vacuum and that the application in the High Court was based on the Bill of Rights, whereas the one before the Constitution was based on constitutional bail.