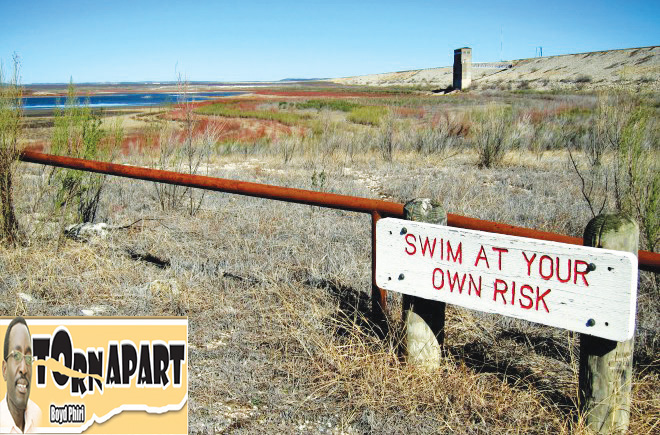 Torn Apart, BOYD PHIRI
IT IS common nowadays to see disclaimers screaming at potential clients in most business entities giving a rougher edge to the commercial world.
I find this particularly interesting because not many businessmen and women have before been sucked into the idea of placing disclaimers on almost everything like the way they do now.
Forget about disclaimers you see tucked under receipts. Those found in the hood these days come in different point sizes and typefaces.
Some are printed on A-4 papers stuck behind shop counters while others are displayed like graffiti on perimeter walls.
If you have never seen disclaimers, visit your nearest car parks in the hood. Their vivid prints are instantly recognisable â€“ PARKING IS AT OWNERS RISK.
If you are one of the people with extreme seismophobia [fear of earthquakes], you would think the message is a timely warning against an earthquake likely to vibrate the ground and swallow your car.
But in this part of the world, where we do not normally experience earthquakes, it can only mean one thing: possible loss of property through theft.
When you drive to a car park hoping to secure your vehicle against vandals and thieves, you would be greeted by a disclaimer.
Surprisingly, such disclaimers were found at police stations, where some people parked their vehicles until Home Affairs Minister Davies Mwila issued a directive banning the use of police cantonments as safe havens for vehicles.
Maybe Mr Mwila was alarmed by the same disclaimers at police stations because even police could not guarantee the security of vehicles parked at their premises.
By definition, a disclaimer is a statement that denies something, especially responsibility.
In other words a disclaimer is a formal statement saying that one is not officially responsible for something, or that one has no direct involvement in it.
Going by the number of disclaimers displayed in the hood nowadays, the obvious conclusion is that everyone is not ready to take full responsibility over something.
I am not sure where this idea of writing disclaimers to clients came from, but my fear is that in the end, every aspect of life would have a disclaimer.
What if you found call girls who ply their trades on streets at night showing disclaimers on their busts saying, â€œSEX WITH US IS AT YOUR OWN RISKâ€.
Of course, to moralists this would be a positive statement although the old profession is inherently a risky business.
What if the person you intend to marry writes you a disclaimer saying, â€œMARRYING ME IS AT YOUR OWN RISKâ€?
I bet it would be weird for one to do so, but who says there are no risks to take in the institution of marriage?
Perhaps this is why some pessimists have coined a phrase for it called in local parlance Shipikisha club, which means â€œA club where perseverance is the normâ€.
What this means for couples is that they have to be ready for flying pans and hot cooking oil if a fight erupts.
You might call this extreme behaviour, but this is what ideally would make you write a disclaimer before committing yourself to the institution of marriage.
What if imbibers who drink on other peopleâ€™s generosity come up with a disclaimer saying, â€œDRINKING FROM THIS BAR IS AT BUYERS RISKâ€?
Obviously, this one would not go well with bar owners and barmen, but on the other hand, it would be a timely warning to those who do not want to share their coloured water with â€˜vulturesâ€™.
The mines may not have issued a disclaimer to people who go underground but strictly speaking, it is a hidden disclaimer because of the risks involved.
Due to unemployment, I can bet my last coin that even if an employer wrote a disclaimer reading â€œJOIN US AT YOUR OWN RISKâ€ many jobless youths would still want to experience the risk.
It would be the same with some seedy guest houses. You walk in a guest house room and find a disclaimer on the bed saying, â€œSLEEPING ON THIS BED IS AT YOUR OWN RISKâ€.
If you find such a disclaimer, just know that you would have a sleepless night from bedbugs and mosquitoes.
Somewhere in the hood, the issue of disclaimers is even more complicated. It would not be surprising to see shebeen queens displaying disclaimers saying, â€œBUYING KACHASU FROM HERE IS AT YOUR OWN RISKâ€.
Of course, the clear alcoholic spirit distilled from homes is inherently risky, but due to the concoctions used in making the local brew extremely potent, it would be wise for shebeen queens to show such disclaimers.
Rickety commuter buses in the hood would also join the bandwagon with disclaimers reading, â€œBOARD THIS BUS AT YOUR OWN RISKâ€.
In rich gated neighbourhoods, you would find disclaimers saying, â€œYOU ARE WALKING IN FRONT OF THIS GATE AT YOUR OWN RISK.â€
Perhaps, a substitute to tired warning notices which read, â€œBeware of dogsâ€ or â€œChenjelani ndi agaluâ€.
But truth be told, underneath some of these disclaimers, there is deceit. Why would one deny responsibility over something after being paid money to provide a good service to the client?
Next time you find a disclaimer at a car park in the hood, park it at your home and put a disclaimer reading, â€œSTEAL MY CAR AT YOUR OWN RISK.
bjboydphiri@yahoo.com