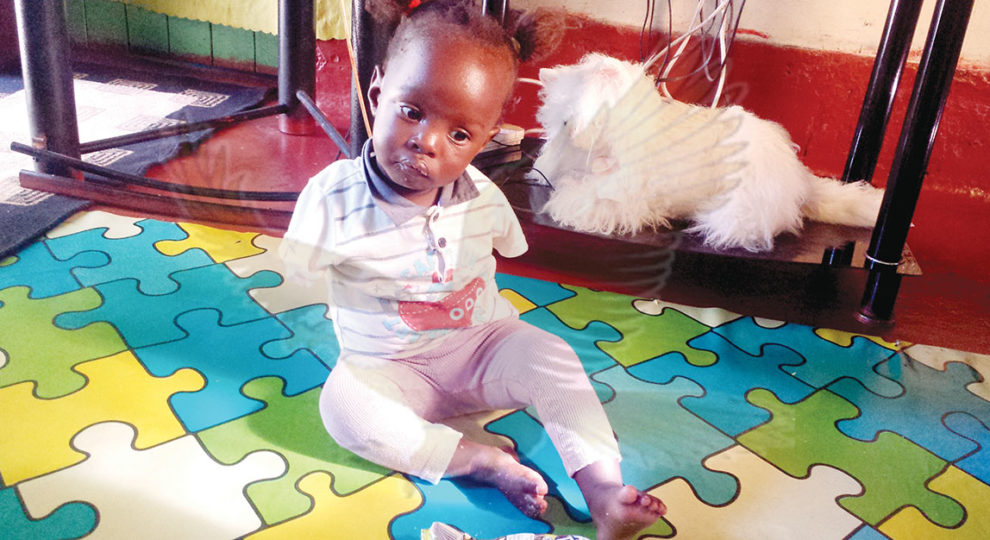 MELODY MUPETA, Kitwe
AT ONLY two, Shekaina knows she is differently abled and is teaching herself survival tactics to enable her to live a normal life just like any other able-bodied child.
Shekaina was born without arms and already, she is able to feed herself and comb her hair using her legs.
Evelyn Muhongo, 23, who is Sheikana’s mother, recalls how she would cry in her sleep after she gave birth to a child without arms.
She never thought that one day her child would grow up to do the normal things that other able-bodied children are capable of doing.
Shekaina, who was born on April 1, 2016, enjoys doing chores using her legs and does not like her mother to take over from her.
“She doesn’t want to depend on anyone for survival and already, she knows her legs are her most treasured assets, which she will have to depend upon for the rest of her life,” Evelyn said.
Evelyn, who lives in Kwacha township, says her child is eager and is already using her legs to do most of the tasks for herself.
She explains that she was married to her daughter’s father for two years but her in-laws could not accept their child because she was disabled.
She said when she was six months pregnant, she started experiencing excruciating stomach pains, which forced her to go and live with her mother until she gave birth.
She sought medical treatment when she thought the pains were too much to bear.
Evelyn said when doctors realised that she had given birth to a child without arms, they advised her to accept the baby’s condition and to show the child the love and care she deserved.
She said at first, it was difficult to accept the condition of her child but that with time, once she realised that it would not change, she embraced Shekaina.
Evelyn says when her husband saw the condition of the child, he felt bad but had to accept her because he knew it was God’s will that they should have such a child.
She explained that when the baby was strong enough, she went back to her husband’s house but when her in-laws saw that the baby was crippled, they failed to accept it.
Evelyn says her husband’s family rejected the child and accused her of having had the baby with another man.
Evelyn said the differences she used to have with her in-laws affected her marriage and she ended up separating with her husband, just after two years of being in marriage.
She says her in-laws do not care about the welfare of the child and they have not made any effort to support her since she separated from her husband.
Evelyn, who now lives with her mother, says members of the public also say bad things about her child but that has never stopped her from loving Shekaina.
Evelyn believes her child will grow to be successful because of the brilliant skills she has exhibited so far, including not wanting to be over dependent on her mother.
The young mother says seeing her daughter do things on her own makes her feel proud.
Apart from using her legs to feed herself, Shekinah is able to use a pencil and a pen to draw and she is also able to sweep using a broom.
“This girl you see here is naughty. She literally imitates what I do. If she sees me cleaning plates, you will find her doing the same thing after some days,” she says.
And Evelyn’s mother, Beauty Muhongo, prays that her granddaughter gets all the support needed for her to finish education.
Ms Muhongo says she is struggling to fend for her family because she is a single parent with no-one to financially support her.
Kitwe Teaching Hospital (KTH) senior officer in obstetrics and gynecology Ngandu Ntonboji explains that Shekaina’s condition is known as congenital malformation and it usually happens when a foetus is exposed to agents such as medicine, alcohol and exposure to radiation through an x-ray machine.
He says congenital malformation can be easily detected during antenatal services and the doctors advise on what can be done before the child is born.
There are different types of congenital malformations and that in serious cases, doctors advise pregnant women to abort because such kind of children die a few days after birth.
Some forms of malformation can be repaired in advanced countries.
“The condition has no cure but can be repaired according to the type of malformation. This means that when a child is born without some parts of the body, then they will grow without them,” he said.
He said the malformations can be detected during antenatal services and it is for such reasons that pregnant women are advised to go for regular medical check-ups.
Dr Ntonboji said from the 10 years of his work experience, he has come across such cases on three occasions only, which shows that they are rare.
He has since advised expectant women to ensure they access antenatal services and also ensure that they follow instructions as given to them by health workers.