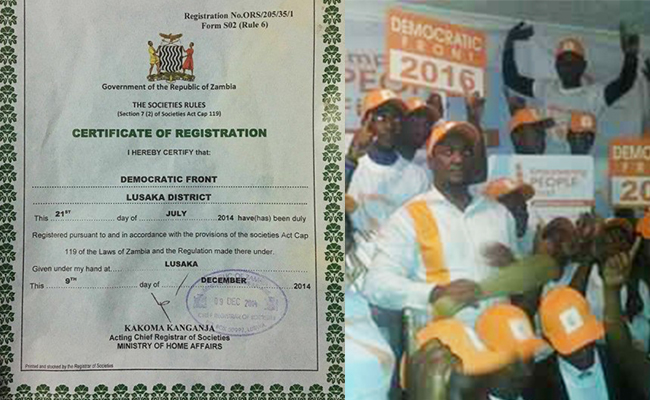 CAROLINE KALOMBE, Lusaka
DEMOCRATIC Front secretary-general Morgan NgÃ³na has sued the Registrar of Societies and former interim president David Chanda and is seeking an injunction to restrain Mr Chanda from posing as the founder of the party.
According to an affidavit in support of ex parte summons for an injunction filed in the Lusaka High Court by Mr NgÃ³na, Mr Chanda allegedly registered a political party called the Genuine Peopleâ€™s Platform, which was later changed to Peopleâ€™s Political Party (PPP).
Mr NgÃ³na contends that Mr Chanda was removed as party president at a meeting that was held by members.
He claims that in the same meeting held in December, 2014, members of the executive of the party were elected and that on December 19, 2014, a search was conducted at the Registrar of Societies in order to ensure that the law of passing off was adhered to.
Mr NgÃ³na said the Democratic Front was registered after an application was lodged with the Registrar of Societies and that no objection was made as regards to the registration of the same.
â€œThat upon registering the new members as above, Mr Miles Sampa having been duly elected as the president of the party was duly recognised and his name was filed at the Registrarâ€™s office,â€ part of the statement reads.
Mr NgÃ³na said Mr Sampa was the only person registered as president of the Democratic Front and that there was no other person registered as such on the Peopleâ€™s Political Party or the Genuine Peopleâ€™s Platform.
He asked the court to dismiss with contempt Mr Chandaâ€™s allegations that he is the founder and president of the Democratic Front.
According to court documents, the Democratic Front name was changed from the Genuine Peopleâ€™s Platform and former Womenâ€™s Secretary Beauty Mulenga assented to the name change in a meeting that was held by some members.
The said meeting, which was held on December 9, 2014, resolved that Mr Sampa replaces Mr Chanda as President and that he (Chanda) would be the national chairperson.
Former Patriotic Front (PF) deputy secretary-general Bridget Atanga would replace the secretary and Anthony Kasolo replaced the vice-secretary, while Namakau Kaingu replaced the chairlady.