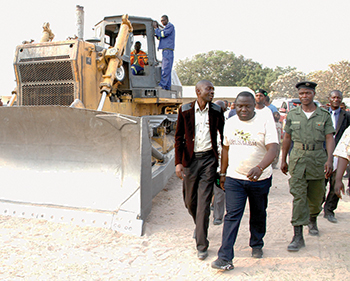 MACKSON WASAMUNU, Mansa
BAHATI member of Parliament Harry Kalaba is happy with progress made on the 21-kilometre Mansa-Kabunda road under construction.
Government is spending US$10 million on the road construction whose works started two months ago.
The MP, who is minister of Foreign Affairs, said the contractor, China Henan Corporation, has indicated that it is ahead of schedule and will finish the project one month before the contract schedule in March 2016.
Once completed, the Mansa-Kabunda Road will be tarred.
â€œI am happy with the progress that is obtaining here, the workmanship is impeccable as the works are of high standard,â€ Mr Kalaba said.
â€œThis is as it should be; it is good for everybody.â€
The minister also visited the Moloshi-Samfya road, which has been worked on much to the delight of the residents.
Mr Kalaba is in the constituency to encourage residents to acquire national registration cards and register as voters ahead of the 2016 general elections.
As part of promoting the exercise, the Foreign Affairs minister renewed his old NRC after paying K2.
The minister is also carrying out on-the-spot checks on infrastructure development in the area.
Residents in different villages where Mr Kalaba addressed a number of public meetings praised President Lunguâ€™s Government for including rural parts of Zambia on the development agenda.
At Lukundushi Community School, Mr Maurice Zyuulu, who represented the head teacher, hailed Government for bringing development through construction of new roads and support to women.
He urged the minister to assist in transforming Lukundushi into a bigger primary school by adding classrooms and building three teachersâ€™ houses.
Mr Zyuulu also requested the minister to assist the school with computers to help in teaching learners information communication technology subjects.