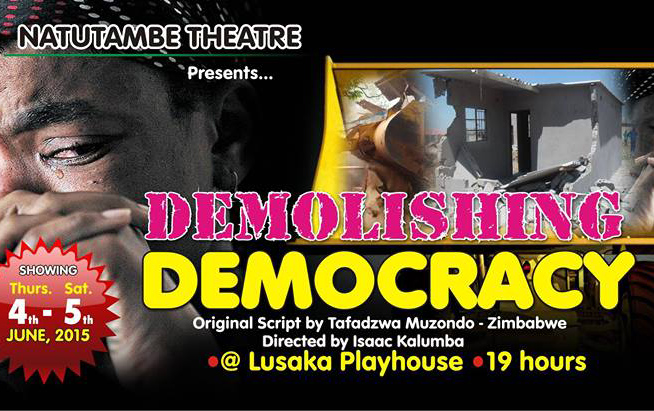 IT is a widespread problem as evidenced by various headlines in the news media.
â€œTaskforce on Land Razes 70 illegal houses in Lusakaâ€, â€œKitwe City Council Given 48 hours ultimatum to name councillors involved in illegal land salesâ€,
â€œGovernment begins Demolition of illegal housesâ€, â€œArrest cadres invading, allocating plots illegallyâ€ and â€œWe are better dead than see our homes demolishedâ€ are some of the headlines that you are likely to see in the news media.
It is against that background that Yezi-Arts will be presenting a play titled Demolishing Democracy at the Lusaka Playhouse on June 4 and 5.
According to a brief obtained by the Weekend Mail from Yezi-Arts, what is clear is that the problem of human settlement leading to illegal settlements is a global problem, and increasingly requires looking into who are behind this (victims and perpetrators).
To be performed by Natutambe Theatre, Demolishing Democracy interrogates the problem and stimulates further discussion on the subject matter. The play, directed by Isaac Kalumba and based on the original script by Zimbabweanaward winning playwright and director Tafadzwa Muzondo, is grounded on experiences from the battles fought during the demolitions.
When the play premiered last year in Zimbabwe, Tafadzwa told that countryâ€™s NewsDay that the demolitions in certain parts of Zimbabwe inspired him to put together thoughts on the squatter settlements into a play with the aim of stimulating dialogue.
â€œThe play takes a community theatre approach that fuses drama, dance, music and poetry to weave a highly engaging and entertaining play that is aimed for local and international markets,â€ he said.
â€œThe problem of illegal settlements is a universal problem so we are confident that the play has a local, regional and international market as a piece of theatre.â€
It will be interesting to see the approach that Isaac will take when the play shows at the Lusaka Playhouse. His cast has been in rehearsal for some months.

One Love for Bob at Chainama
NAMA starts television programme