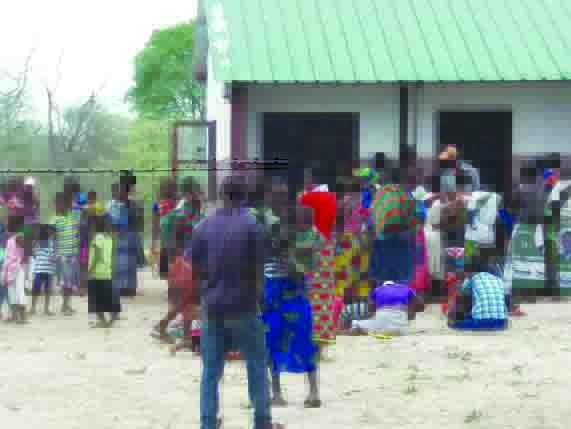 BENEDICT TEMBO, Sioma
A LIVESTOCK centre under construction in Kaanja settlement of Sioma is one of the infrastructure projects changing the face of one of the new districts in Western Province.
Before the declaration of district status in 2013, Sioma was just a mission outpost in Shangombo district.

The Catholic Capuchin Fathers settled at Sioma near the Zambezi River and built a house for priests, sisters, church, a hospital, and a primary and secondary school, among other infrastructure.

However, following the declaration of its district status, Government put in place a local authority and district administration.
Both Sioma District Council and the district administration, and various government departments have been renting from the Catholic Church.
To this end, Government is building infrastructure such as district administration offices, the civic centre, post office, a police station, and high cost, medium and low- cost houses five kilometres (km) from Sioma mission.
And because people in Western Province are predominantly pastoralist, Government, with the help of the World Bank, is constructing a tier-three livestock training centre at Kaanja, about 15 km from Sioma.
The centre, a state-of-art facility, will be the first of its kind in Western Province.
Apart from having a kraal and dip tanks, the centre being built at a cost of K12 million will have livestock treatment and marketing facilities, apart from staff houses.
It will also be used as a livestock multiplication centre because it will be conducting artificial insemination.
Sioma District Council social and economic planner Peter Mpanda says the facility will bring a myriad of benefits to Sioma such as employment creation, and improving farmers’ skills in livestock production and disease surveillance.
“Beneficiaries will receive knowledge in sustainable business skills and participatory extension methodologies,” Mr Mpanda said.
Western Province fisheries and livestock coordinator Frederick Banda said since the centre will be connected to the national electricity grid, many people along the way will benefit.
Dr Banda also anticipates other economic spin-offs for the host community.
He is, however, worried by the slow pace of the construction and fears the contractor may not meet the deadline. The contractor has 10 months remaining to finish the works.
At Sioma mission and surrounding areas, people have begun constructing decent structures, including lodges to cater for increased demand for bed space.
Economic activities have, however, been delayed by the extremely low pace of construction of the district administration and other attendant infrastructure.
Construction of 20 low-cost houses which started in 2014 is still at slab level.
However, the 10 medium-cost houses are at roof level while the post office is at window level.
The police station, its eight and two medium cost houses are still at box level.
The civic centre is at ring beam, while two high-cost houses are at wall plate level.
Other infrastructure
The health sector has a mix of success stories and bad news following the upgrading and construction of facilities to enhance health service delivery.
While the five health posts have been completed, the upgrading of some health facilities such as Lipaneno health post is still pending.
If completed, it should serve people who are covering as much as 50km to access health care.
However, this project, which started when Sioma was still under Shangombo, still has no staff house. It was funded under the poverty reduction programme.
Kalenga health post, which is designed to cater for the Sitoti catchment with a population of about 500 people, has not yet reached window level.
Liumbu health post, initiated by community members and funded by people who hail from there but live in the cities, caters for over 5,000 people.
Using the Constituency Development Fund (CDF), Sinjembela health centre now has a maternity annex.
The extension of Silowana under CDF is not only fully completed but the roof is alleged not to have been properly done and, as a result, leaks profusely. It has also not been painted.
VIP toilets have been built at Sinjembela, Kaanja and Mutomena.
Brick – lined incinerators have been installed at Lyabangu, Nalwashi, Kaanja, Mutomena and Nangweshi health facilities.
The construction of five health posts has been hailed as a game changer in health service delivery in Sioma. The five are part of the 650 being constructed countrywide.
“All the five are complete, functional and running and have reduced distances for people, especially pregnant women,” a health worker said in Sioma.
They have been erected at Kabulatu off the Mongu-Sesheke road, at Mulele, which is part of Mutomena catchment which has over 7,000 people, at Liwandamo, also part of Mutomena catchment, and Mwambao and Mbeta across the Zambezi River, bringing health care within a 5 km radius.
All the health posts are fully staffed as the Ministry of Health dispatched health personnel from the 8,000 recently recruited.
The district, which had no medical officer for a long time, now has one doctor as district health medical director. It has also received an ambulance.
Sioma council secretary Judith Shiliya says the district awaits to be enlisted for the Pilot Programme for Climate Resilience (PPCR) under the Ministry of Finance.
The Anglican Church has, however, already started implementing PPCR projects in Mambolomoka and Sioma wards.
Planned projects
There are some schools planned for upgrading, which include Mutomena, from primary to secondary school.
The school, which also has pre-grades, lacks staff accommodation and needs a borehole.
There are also nine schools requiring to be upgraded from community to regular and this entails construction of 10 three-room class room blocks at all of them  to enable many young people to access quality education.
A District Education Board Secretary (DEBS) and medical office await construction.
Investment
Mrs Shiliya said Sioma is conducive for investment because of its location; as home of the Ngonye Falls, Sioma is a tourist attraction.
It also houses Sioma-Ngwezi National Park, which has various animal species
The district is also endowed with a lot of pristine forests dotted around it.
“It also has the Silowana plains which can attract investment in rice growing and sugar plantation,”  Mrs Shiliya said.
Other economic potential areas Sioma is endowed with apart from tourism and agriculture are salt mining and aquaculture.
The benefits from the investment opportunities are creation of employment.
The district hopes to benefit from the planned tarring of the Sioma-Shangombo road as it will lead to increased trade.