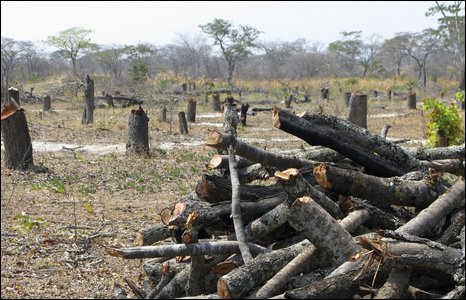 LINDA NYONDO, Lusaka
MINISTER of Lands and Natural Resources Jean Kapata has expressed concern at the increased rate of deforestation and degradation which continue to rise annually.
Ms Kapata said the increased forest degradation and deforestation is due to charcoal production, illegal harvesting of timber, poor agricultural practices and occurrences of fire.
â€œ80 percent of the households in our country rely on charcoal or fuel wood for energy. This is from our forests and is a major renewable energy that requires prudent harnessing.
â€œTo reduce pressure on our forests, we need to invest in alternative sources of energy such as solar, hydro electricity and wind power,â€™â€™ she said during the commemoration of the International Day of Forests in Lusaka on Tuesday.
Ms Kapata said the private sector should consider investing in technological innovations and sustainable forest management.
Meanwhile, Government has launched the national strategy to reduce deforestation, and a forest degradation policy which focuses on contributing to the national reduction of greenhouse gases.
Speaking at the launch of the strategy, Ms Kapata said the strategy provides a framework for monitoring, reporting and verification.
And speaking earlier, Finnish Ambassador to Zambia Timo Olkkonen said the large quantities of charcoal in Zambia along the roadsides are worrying.
â€œEach sack contains the remains of a full-grown tree.Â  But it also signifies the important value charcoal has for household incomes to the rural population as producers, also urban people as traders and buyers of the commodity,â€ he said.
And speaking at the same function, United Nations resident coordinator, Janet Rogan said Zambia has been losing forests at an alarming rate.
â€œCurrently, we are losing about 230,000 hectares of forest every year, thatâ€™s more than the size of Mauritius and Hong Kong,â€ she said.
Ms Rogan said there is need to find ways to compensate for shifting to sustainable management of natural resources and encourage communities to shift to alternative, more sustainable and less damaging livelihoods.
And MUTINTA HADUNKA in Ndola reports that the Zambia Forestry and forest industries corporation limited (ZAFFICO) says it is lacking land and trees on the Copperbelt Province.
ZAFFICO managing director Frighton Sichone said discussions to move the corporationâ€™s operations to a rural set-up are underway and have reached an advanced stage.
Mr Sichone said the corporation is faced with scarcity of land for tree growing businesses on the Copperbelt Province because of demand for land for expansion of towns and municipalities by local authorities and other major developments taking place in the province.
â€œAs you are aware there are plans of building an international airport here in Ndola and plans by the Ministry of Commerce and Industry to build a Multi-Facility Economic Zone and all these developmental projects are being undertaken on land that is currently being occupied by the Forestry Department.
â€œAnd because we support and see the need of these, we have engaged relevant stakeholders to discuss moving us to rural areas where we can fully operate,â€ he said.
Speaking during this yearâ€™s commemoration of World Forestry Day in Ndola dubbed: â€˜Forest and energyâ€™, Mr Sichone urged stakeholders to take an active role on issues concerning forestation, conservation and reducing the effects of climate change on the environment.
Mr Sichone added that it is important for young people to be involved in the fight against deforestation and urged youths to continue with their efforts of encouraging afforestation throughout the year.