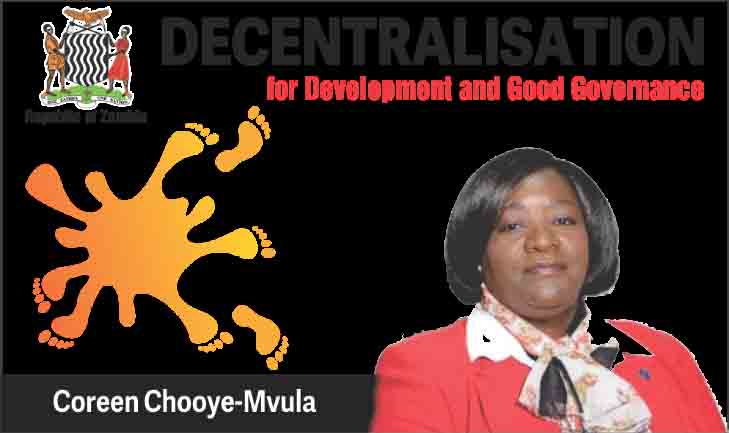 COREEN CHOOYE-MVULA
THE implementation of decentralisation in Zambia has reached a highly advanced stage following the adoption of the Republican Constitution of 2016, Act No 2 of 2016 in January this year by President Edgar Chagwa Lungu.
The new Constitution has uplifted the decentralisation process by providing for principles of decentralisation within Parts IX, X XI which stipulate that functions, responsibilities and resources from the national government and provincial administration will be transferred to local authorities in a co-ordinated manner.
The Constitutional so provides for capacity building of local authorities to enhance their planning, management and execution of policies in respect of matters that affect the people within their jurisdiction.
This will promote democracy and accountable use of resources to foster national unity.
Decentralisation may not be the magic bullet to development but is certainly a fundamental channel or means to improved service delivery leading to poverty alleviation.
In particular, the Constitution provides that the management and administration of political, social, legal and economic affairs of the state shall be devolved from the national government level to the local government level. This provision among others now ensures that our decentralisation process stands on a firm policy and legal framework and will set to proceed in a more robust and well co-ordinated manner.
The arrangements for decentralisation implementation being undertaken by Government shall be and are in line with the new Constitution.
We expect therefore to see sound, reliable and predictable sources of revenue for local authorities to enable them to perform their usual as well as devolved function. The new Constitution also guarantees that central government will provide adequate resources for the performance of such functions by local authorities including the sub-district structures namely ward development committees.
In order to conform to the provisions of the Constitution, and given the supremacy of the Constitution over sector legislation, it follows therefore that relevant sector-based laws that are at variance with the Constitution will require amendment to align them to provisions of the Constitution, which has provided overall guidance on the desired governance system for our country.
Another very important provision of the new Constitution is that it has uplifted the status of the council in the sense that councils will administer the district by overseeing programmes and projects, in addition to the traditional role of making by laws.
In other words, councils will assume a new status altogether as a result of decentralisation which is a reform process that has restructured the governance system.
Allow me to use this platform to encourage citizens of Zambia to read the provisions of the new Constitution as they relate to the local government system, devolved governance and the administration of provinces, districts and wards.
As you read, you will realise that devolution, which is intended to improve service delivery and promote bottom-up integrated planning, now rests on a firm legal framework, whose reversal may almost be next to impossible.
The author is assistant director (communications)
Decentralisation Secretariat
Cabinet office
Tel: 0211-226787
email: coreencm2003@yahoo. com