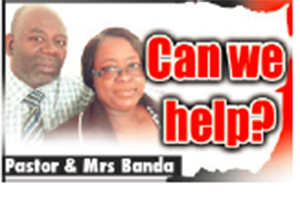 CAN WE HELP? with PASTOR & Mrs BANDA
Dear Raphael and Namukolo,
I AM 17 years old and my boyfriend is 19. We officially started seeing each other six months ago. But to my surprise, he is close to another girl and when I enquired as to what was happening, he said he was dating her in the same way he was dating me. He explained that dating is not courtship and he can date as many girls as he wants before finally picking one to court and marry. Now I am confused. I thought dating someone meant having a serious relationship with them. Please help me understand what dating is?
SHOCKED
Dear Shocked,
You have just discovered albeit the hard way what a terrible thing the so-called dating game can be if not taken the right way.
There are basically two common usages of the word â€˜datingâ€™. Some use it interchangeably with the word courting or courtship.
The more popular usage refers to some special friendship between a male and a female, which is more than just mere general friendship but it also falls far short of being a courtship. Because one or both of the parties do not treat it as a serious courting relationship, it is fraught with many problems.
We will highlight to you some of its characteristics which make it fall short of serious courtship and consequently why you should avoid it in the first place.
The following are its main features.
IMMATURITY
It is a relationship normally entered into by two immature people or one of them might still be immature. Immaturity refers to:
â€¢ Age: They are not yet adults. In some places, young people start dating as early as 12 or 13 years old. Courtship and marriage is meant for adults.
â€¢ Unprepared for marriage. They still have not sorted out career issues, do not have a means of livelihood, and neither do they have a house or expect to have one in the near future.
TRIGGERED BY INFATUATION
Dating is driven by strong feelings of love towards a member of the opposite sex. The couple is seeking to satisfy their feelings which they have developed towards each other. Unfortunately, more often than not, these feelings are nothing but infatuation. The feelings of love that come with puberty should not be mistaken as a green light for the young person to start thinking of finding a partner. These strong feelings only confirm that your body is functioning properly. Love is more than just a strong attraction for a member of the opposite sex. True love is a commitment made after considering a whole lot of things.
RELATIONSHIP TIP
There is good and bad jealousy. Good jealousy protects and preserves oneâ€™s partner whilst bad jealousy devours and destroys them.
pchilufya@daily-mail.co.zm; gender@daily-mail.co.zm.