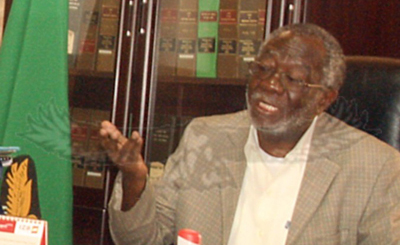 JIMMY CHIBUYE, Lusaka
THE Lusaka High Court has ordered Minister of Labour and Social Security Fackson Shamenda (left) to pay Dangote Industries Zambia Limited over K112,000 for defamation.
But when the matter came up yesterday, lawyer representing Dangote Industries Armanda Theotis applied for adjournment because the cement company and Mr Shamenda wish to settle the matter out of court.
High Court deputy registrar Charles Zulu has ordered Mr Shamenda to pay Dangote Industries Zambia Limited K112,042.84 for not appearing in court and failure to file any defence.
This is according to an interlocutory judgment in default of appearance and defence signed by Mr Zulu on Wednesday.
In this matter, Dangote Industries Zambia Limited had sued Mr Shamenda demanding aggravated damages for alleged slander and libel after he accused the cement company of trying to bribe him last year.
â€œThe defendant having not appeared or delivered any defence to the writ of summons and statement of claim, following the expiration of the conditional memorandum of appearance and the defendantâ€™s failure to amend his application to set aside writ of summons for irregularity.
â€œIt is this day adjudged that judgment in default of appearance and defence be and is hereby entered in favour of the plaintiff and against the defendant for special damages in the sum of K112,042.84 to be assessed by the deputy registrar,â€ he said.
Mr Zulu further ruled that an interlocutory judgement be entered against Mr Shamenda in favour of Dangote Industries for damages for general damages for slander he published.
Mr Shamenda is alleged to have published the slander in the presence and hearing of the Labour Commissioner Cecilia Kamanga, Mineworkers Union of Zambia (MUZ) president Nkole Chishimba and his general secretary Joseph Chewe, Workers Compensation Fund Control Board public relations manager Maybin Nkolomba, Patriotic Front (PF) members and various members of the local press present on September 13, last year at a meeting held at the companyâ€™s premises in Ndola.
The court also ordered that Mr Shamenda pays general damages for libel he caused to be published in the local media on September 15, and October 1, last year.
Mr Zulu also ruled that the minister pays aggravated and exemplary damages for slander and libel and interest on the money at current bank lending rate.
But Dangote Industriesâ€™ lawyer Armanda Theotis applied for adjournment.
â€œI have an application to make for an adjournment, reason being that I have received instructions from my client that they may want to resolve this matter amicably and out of court,â€ Ms Theotis said.
She said she wants to get further instructions on the issue so that she can make an appropriate order if the parties want the issue settled out of court.
The matter comes up on June 12, 2015.