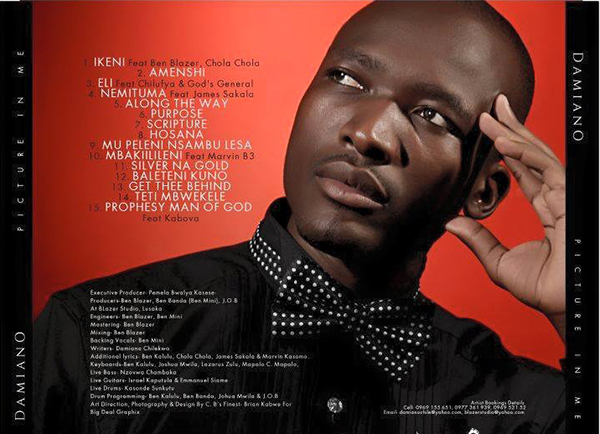 GOSPEL GROOVES with FELIX NYAMBE
HE is one of the new revelations of Christian music, whose background in secular music is worth writing home about.
But today he is â€œborn againâ€ and worshiping the Lord with gladness.
Born Damiano Chilekwa and known to many of his flock as Mwana Mfumu, Damaino is set to launch his much anticipated debut gospel album at Inter-Continental Hotel in Lusaka on July 10, 2015.
And his launch is set to be an-extraordinary one because Damiano has lined up a star-studded show which will feature the likes of Ephraim (the Son of Africa) and the anointing music of the Peace Preacherz.
Dubbed Mwana Mfumu Album Launch, Damiano stated on his Facebook page, the whole event has been set for Friday July 10 at the Hotel Inter-continental.
With songs such as Ikeni, Amenshi, Eli, Nemituma and Along the Way, Damiano has set the tone of a true worshiper in the body of Christ.
On the album, the gospel singer also features the likes of Chola Chola and Ben Blazer, who he collaborated with on the song Ikeni, while Godâ€™s General added justice to the song titled Eli.
Other seasoned artistes who worked with Damiano on his album include Mark Kasomo of the B3 fame on the song Imbakilileni, Kobova (Victor Chaushi) added some flavour on the song Prophecy Man of God.
The album, which was recorded at Blazer studios adds up to the numerous albums recorded by youthful praise and worship singers in the recent past.
Renowned guitarist James Sakala collaborated with Damiano on the song titled Nemituma, making the whole project one of the finest gospel releases of 2015.
But having started as a secular musician, Damiano is not ashamed to call upon his Father in Heaven who he reckons is the same yesterday, today and forever more. Call him the proverbial â€œprodigal sonâ€ if you like.
On most of his songs, such as Ikeni, Damiano seeks the Lordâ€™s presence and intervention among his chosen children who are faced with high mountains and deep valleys in their daily Christian lives.
And as he embarks on his crusade to spread the gospel of Jesus Christ across the world, it is the songs such as Teti Mbwekele (I will never go back) which have strengthened the young minister of the gospel.
Damiano, who has surely found comfort, faith and hope in Christ, he promises allegiance to his creator and emphasises that he will never go back to the â€œthings of the worldâ€.
With Ephraim, Peace Preacherz and Kings having released and marketed their new projects in the last few months, it will surely be a chilling night to have the award-wining gospel ambassadors under one roof.
Ephraimâ€™s latest delivery titled Teti Ntwishike is already healing many believers across the country, making him one of the most appreciated ministers of the gospel.
The Peace Preacherz, that astonishing singing family group, need less or no introduction at all, having come on the gospel music circuit with a block-buster of an album titled Katalalika Wamabimbi in 2011.
Their 2013 album Ninkumbu Shenu saw the group scoop the coveted CHAPRO Best Gospel Album award as they embarked on the release of the current album Tatwabunde.
Songs such as Ebumi Bwandi, Ago Search h for Jehovah, Nizamuona, Imfumu Yaba Yudah, Amama and Ulimulungu may just be the salt for those expectant congregants at Hotel Inter-continental.
fmmusik@yahoo.co.uk, 0979360993/0964873656