MULWANDA LUPIYA, Ndola
CHIPOLOPOLO forward Patson Daka has continued with his fine form for Red Bull Salzburg since returning from injury with the latest demonstration of that being a hat-trick over the weekend that moved him to top of the Austrian Bundesliga top-scorers chart.
Salzburg beat title rivals Rapid Vienna 4-2 at Red Bull Arena to open a six-point gap at the summit of the log.
Daka, who sustained an injury against Atletico Madrid in October during the Champions League group stage and sat out for almost a month, has not disappointed since his return although fans would love to see scoring on the bigger stage in Europe.
After failing to score against Spanish side Villarreal in the Europa League match last Thursday as they went down 2-0, Salzburg were eager to return to CLICK TO READ MORE 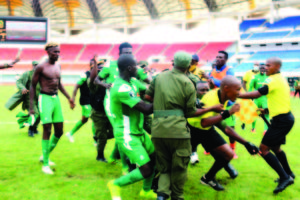 NAPSA leave it late after Mayuka steps up