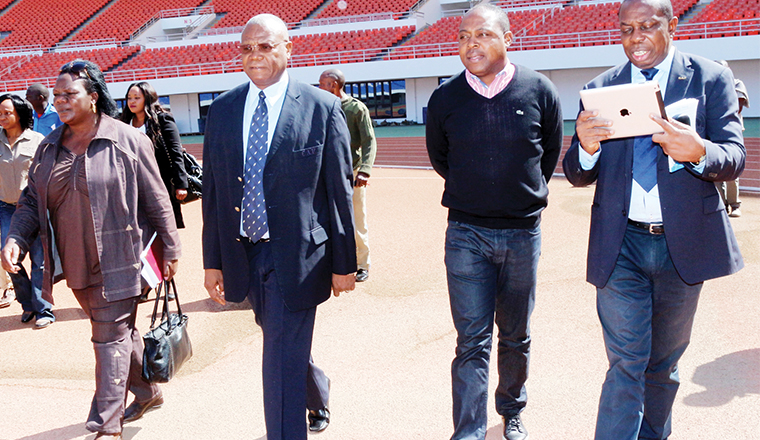 â€¦Zambia faces Cameroon, Ivory Coast in bid to host 2019 Africa Cup
By STEPHEN PHIRI
ZAMBIANS are waiting with bated breath ahead of todayâ€™s announcement of the country to host the 2019 Africa Cup of Nations.
Zambia has put its hat in the ring and will come up against other credible bids from North and West Africa, regions that have, by far, hosted the most tournaments.
The country comes up against Algeria, Cameroon, Gabon, Guinea and Ivory Coast, all strong candidates, to host the prestigious biennial tournament.
This is the countryâ€™s sternest competition off the field of play as it seeks the right â€“ for the third time â€“ to host the tournament after failures in 1988 and 2004.
The bid document was delivered, albeit belatedly, Confederation of African Football CAF officials have been here to inspect all facilities and what remains is the verdict.
Some of the salient issues considered are infrastructure (stadiums, hotels, and roads), communication and security, and Zambia stands relatively tall on all these. The other critical consideration is regional rotation, which may disadvantage Zambia as South Africa and Angola, both in southern Africa, have hosted the tournament in 2013 and 2010, respectively.
Football Association of Zambia president Kalusha Bwalya, an optimist throughout and southern Africaâ€™s flag bearer on the CAF executive, is this time less hopeful.
â€œWe put up a very good bid but itâ€™s very difficult to win. Many countries have also come up with their bids. Itâ€™s not looking promising for us,â€ said Kalusha, who is a CAF executive committee member.
In the history of the Africa Cup of Nations, Zambia has never hosted the lucrative tournament despite boasting one of the most revered teams on the continent.
Zambia was picked to stage the 1988 edition but withdrew, citing lack of infrastructure and CAF suspended the country for two years from competing in continental competitions.
That was not all; Zambia and Malawi put up a conjoined bid to stage the 2004 edition but were not successful as CAF picked Tunisia to stage the event. With its ego battered, Zambia also failed to qualify for the tournament.
But despite all the odds stacked against it still, Government believes hosting the 2019 edition is, to an extent, a matter of right.
â€œWe have a good record of peace as a nation. We also have good stadia like Levy Mwanawasa Stadium in Ndola and Heroes National Stadium in Lusaka. We also intend to rehabilitate Konkola Stadium and build another one in Livingstone,â€ Ministry of Youth and Sport permanent secretary Agness Musunga said.
A Lusaka-based fan, Martin Mutale, is upbeat Zambia will be picked to stage the 2019 Africa Cup of Nations.
â€œZambia should be given to host the 2019 Africa Cup because we have won the Africa Cup and yet we have not hosted it. We deserve to host because infrastructure is there and we are a peaceful country. It will be a golden jubilee gift if we are given the right to host the Africa Cup,â€ Mutale said.

Swedish side after Chilufya signature