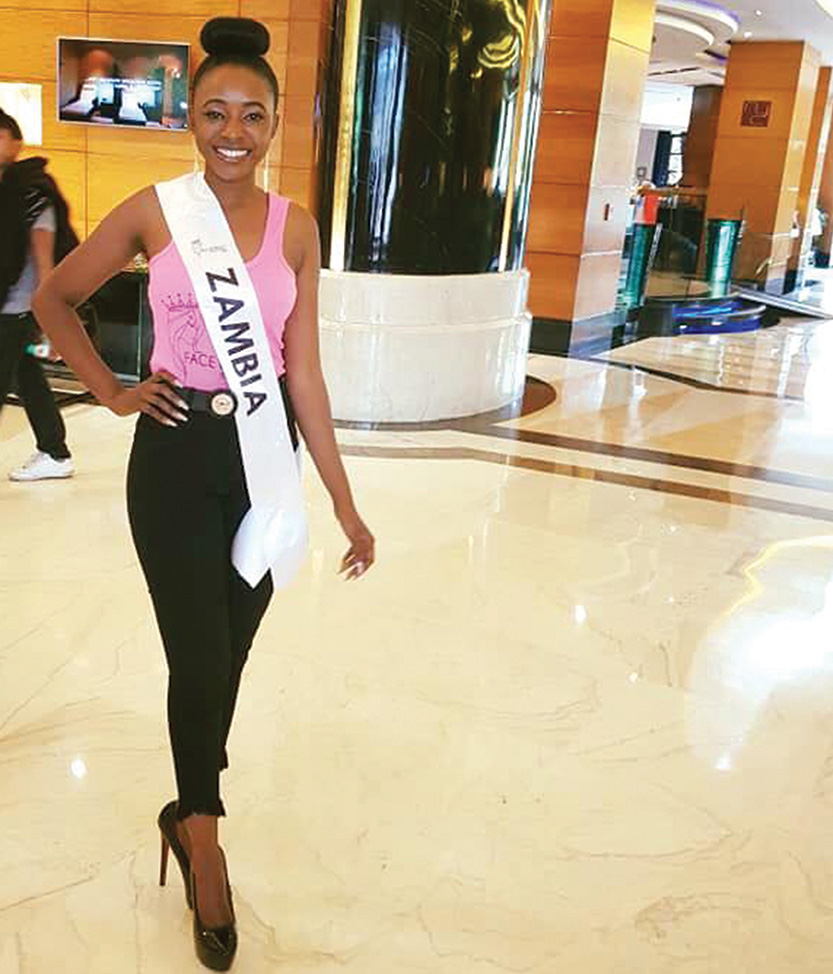 ZIO MWALE, Lusaka
MODEL Cynthia Sakala was voted Miss Congeniality at the just ended Face of Beauty International pageant in New Delhi, India where Miss Myanmar Myint Mo May was the overall winner.
Miss Myanmar, which is also known as Burma and has been in the international media over the Rohingya refugee crisis, reigned supreme over 42 other hopefuls in what was the seventh edition of the pageant held in the grand ballroom of City Park Resort in Delhi.
The coronation night concluded with Latvia’s Linda Novika as First Runner-Up, Nicaragua’s Geyssell García taking the Second Runner-Up spot, India’s Diksha Dhyani as the Third Runner-Up and the Philippines’ Rosantonette Mendoza being named the Fourth Runner-Up.
The Miss Face of Beauty International confirmed the results in a statement posted on its Facebook page.
“The local organisation led by Sandeep Kumar successfully hosted this spectacular event which was anchored by seasoned host Dharna. Mila Manuel’s Face of Beauty International pageant has proven its status as a reputable pageant that aims to develop young female leaders from around the world who personify the combination of beauty and intelligence that defines the 21st century,” the statement reads.
“During the contestants’ stay in the host country, they participated in ‘Stop Violence against Women” and ‘Save the Girl Child’ rally in India making all efforts to pass the message to locals.”
The rallies were apt.
India is the most dangerous country for sexual violence against women, according to the Thomson Reuters Foundation 2018 survey.
Quartz, a news website that operates editions in Africa and India, reported that the survey, which measures sexual and non-sexual violence, discrimination, cultural traditions, health care and human trafficking, has been criticized for reflecting more perception than data.
“But India barely fares better in other studies that rank its treatment of women. It placed 131st of 152 countries in the Georgetown Institute’s global ranking of women’s inclusion and well-being,” the website reported.
“India’s National Crime Records Bureau reported 338,954 crimes against women including 38,947 rapes in 2016, the most recent government data available. That’s up from 309,546 reported incidents of violence against women in 2013.
“High-profile attacks on Indian women have shocked this nation of 1.3 billion in recent years. The 2012 gang rape of a 23-year-old student in Delhi who died from her injuries caused public outrage. The incident helped spur an amendment to India’s criminal law, which broadened the definition of sexual crimes against women to include stalking, acid attacks, and voyeurism.”
The pageant itself aims to develop young female leaders from around the world.
In its own words: “Our goal is to empower contestants to find beauty and to become that beauty. Contestants participate in charity events; workshops and symposiums; swim wear, national costume, and evening gown competitions; and travel in wanderlust across the host country together. Contestants must prove themselves intelligent, well-mannered and cultured.”