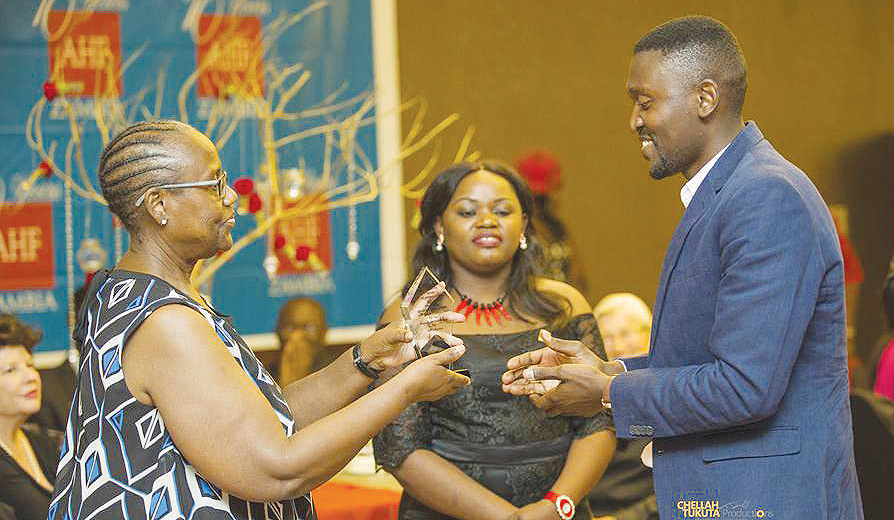 CHOMBA MUSIKA, Lusaka
B’FLOW, who was recently honoured with the AIDS Healthcare Foundation (AHF) Goodwill Ambassador Award, has a simple message for his fellow musicians – there is more to music.

“It’s not about the number of hit songs that you’re capable of releasing but the number of lives you can change with your songs,” he says.
B’Flow (Brian Bwembya) was bestowed with the Goodwill Award for using his music to campaign for the fight against HIV/AIDS and other vices such as gender-based violence.
AHF board chairperson Cynthia Davis handed over the award to the Music for Change organisation founder last weekend at a ceremony in Lusaka.
B’Flow plaque reads: “AIDS Healthcare Foundation award of appreciation presented to Brian Bwembya [AHF Goodwill Ambassador] for your support and commitment to AHF’s mission.”
Receiving the award, the Mandela Washington Fellow dedicated it to people living with HIV.
“I dedicate the award to everyone receiving antiviral therapy from AHF across the globe,” said B’Flow, who is also former Kabwe High School Anti-AIDS and Drugs club chairperson.
B’Flow, who recently won the Humanitarian Award at the Kwacha Music Awards, says he will continue to release songs that have a positive impact on the lives of his fans and society at large.
“It’s not just about releasing hit songs but releasing music that changes lives and has a meaning,” said the Dear Mama singer, whose music has been endorsed by former US President Barack Obama.
B’Flow has featured in Paul ‘Just Slim’ Banda’s song, Know your status, which encourages Zambians to get tested for HIV and start treatment.
Paul is an HIV/AIDS activist who was born positive with HIV but has been living a healthy life.

Peter Shakes lifts Jesus’ name
Catch Kiki if you can