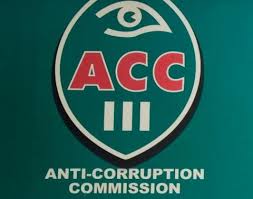 CORRUPTION is a cancer that slowly eats away at the moral fabric of society and denies it of any development. So it is a matter that must not be belittled or twisted for political expediency.
It is a cancer because of its devastating effects which make the poor poorer and only a few richer.
This is why Government has prioritised the fight against corruption and placed it high on the agenda so that the benefits from the wealth it is creating filter to all, regardless of their status in society.
Moreover, Government stands for both the poor and the rich and any efforts aimed at fighting the scourge are intended to assure that our leaders mean well for the citizenry.
Among the efforts aimed at fighting corruption is the creation of a body, the anti-Corruption Commission, which is mandated to deal with any form of corrupt practices.
In its resolve to fight corruption, the ACC has devised various strategies to curb the scourge for the good of society.
Some of the strategies include the implementation of the Anti-corruption policy and programmes such as corruption awareness intended to make citizens aware of the devastating effects of the vice.
It is therefore disappointing that some quarters of the opposition are demeaning the efforts by trying to undermine Government.
Speaking during a question and answer session on Friday, Vice-President Inonge Wina told Parliament in response to Ndola Central Member of Parliament Emmanuel Mulenga (PF) that the opposition is using the fight against corruption to demean Government.
Mr Mulenga wanted to know Government’s position on corruption following the strong stance taken by President Edgar Lungu.
Mrs Wina, in her response, aptly put it that the fight against corruption is the responsibility of everyone and it was unfortunate that the opposition was portraying every Zambian as being corrupt.
All Zambians are, or must be, responsible for the fight against corruption because the outside world looks at the country as a whole and not segmented among the various stakeholders.
The responsibility to bear a good name for the country and the burden to be patriotic rest with each citizen to be that good ambassador anywhere in the world.
The fight against corruption will not yield positive results overnight, but the gains are gradual, evident and collectively rewarding.
Government, through the law enforcement wings, the Parliamentary Committee and other organisations have gone flat-out to rid the nation of corruption.
Some public officers who have been found guilty of corrupt practices have been subjected to the course of the law and punished for their misdeeds.
In the fight against corruption, let us remember that Government is dealing with an ingrained attitude which needs more time to defeat and concerted effort from all concerned Zambians, including members of the opposition political parties.
And while members of various political parties may stick to their political divide, the fight against corruption should be a meeting point and a common cause for all to be united.

Experts must speak out
Politicking about everything retrogressive