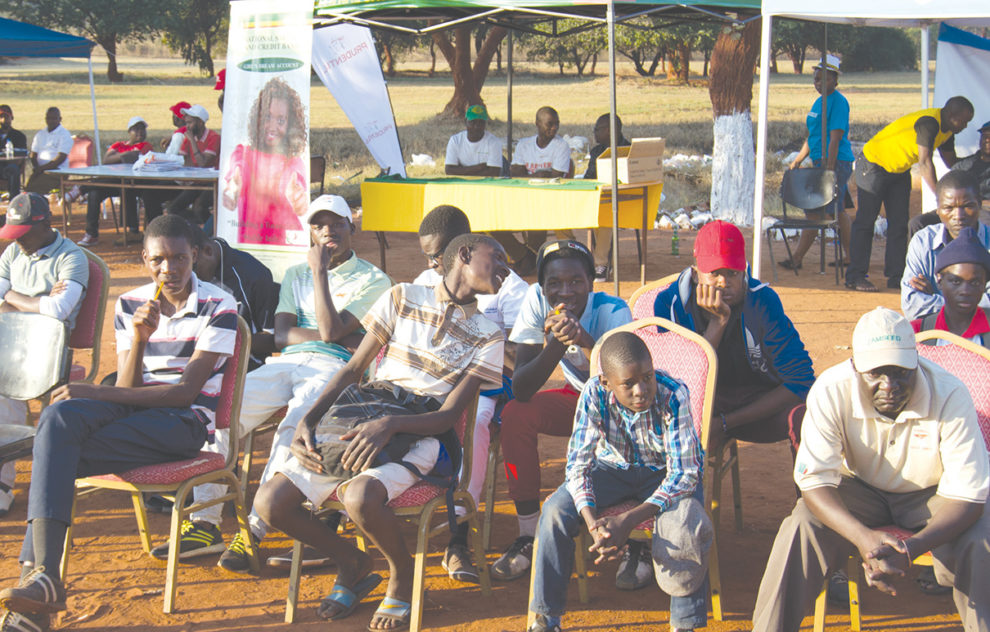 BENEDICT TEMBO, Mumbwa
NOT every decision is made in the boardroom, and when it comes to matters concerning teeing off, a golf club is always ideal as

evidenced by the recent gathering of corporates at Sanje Golf Club in Mumbwa.
Moved by the common goal of improving the sport, one after the other, representatives of the corporates which co-sponsored the 2017 Sanje Golf Open tournament in Mumbwa committed themselves to continue aligning themselves with the event.
The corporates – Barclays Bank Mumbwa Branch, FSG Funeral Services, KwikFin Financial Services, Mumbwa Motel, Natsave Bank, Professional Insurance, Prudential Insurance, Zamseed and Zambian Fertilizer- affirmed their affiliation with Sanje.
The companies’ support to Sanje Golf Club, owned by the Zambia Air Force in Mumbwa base, is critical for the officers’ interaction with civilians.
It is also cardinal for the golf club to continue being on the Zambia Golf Union (ZGU) circuit.
It keeps ZAF officers and their children busy and fit although the club notes with sadness that there are more patrons on hole number 19 (the bar) where they enjoy alcoholic drinks instead of being on the golf course.
“We will continue to give back to the [Mumbwa] community,” Barclays Bank Mumbwa branch manager Owen Sakala said.
Wankumbu Sichivula, the KwikFin director, said the tournament offered his micro-financial institution an opportunity to interact with its customers as well as give back to the communities in which they operate.
“We will sponsor this tournament next year,” Mr Sichivula said.
Prudential sales supervisor Henry Sinyangwe reminded the audience during the prize-giving ceremony that there is a future beyond employment, hence the need to start saving for the future.
“We have been here for the past four years [and] we will continue being here,” assured Natsave operations officer for Mumbwa, Ian Kunda.
Mr Kunda said apart from co-sponsoring the event, Natsave employees will also start playing golf.
“Make savings a habit,” Kunda told the golfers, ZAF officers and spectators.
FSG representative Abel Mwenda said although people do not like them because of their emphasis on the need to prepare for funerals, it is a reality of life.
Mr Mwenda said FSG has been associated with Sanje Open since 2011 and will continue being co-sponsors.
“People do not like us, but one day they will die. Our core business is to provide you a service when you have a bereavement,” Mr Mwenda said.
ZAF Mumbwa station commander Terry Moono, overwhelmed by the commitment by the golf club’s cooperating partners, said he is looking forward to working with them soon again.
“I will not expect them next year but tomorrow so that we finish the structure [clubhouse under construction],” he said.
The new clubhouse, which is at window level, is at the heart of colonel Moono, who wants the structure to finish so that it can serve golfers well.
The construction of the new clubhouse has stagnated due to lack of funds.
The club is in need of course maintenance equipment to upgrade the 3-kilometre squared nine-hole golf course.
That is why Col Moono would rather engage the cooperating partners outside the tournament to see how far they can help spruce up the club.
The golf club, on the south-west of the air base, draws its name from Sanje Forest where it is situated.
The air base is 27kms from Mumbwa town.
The current clubhouse was a residential unit whose change of use was necessitated by the construction of the golf course in 2000.
Club captain Sidney Kabaso appealed for technical support to train the club’s juniors who have exhibited potential to become great golfers.
Captain Kabaso wants ZGU to send a coach to work with the juniors to help them improve their game.
He also bemoaned the poor communication between Sanje and the ZGU.
The camp commander and club leadership extolled ZAF commander Eric Chimese for the help he has continued to render to the club.
But they feel that it is also their duty to supplement the support from the ZAF command.
ZGU vice-president (south) Chris Mulenga commended the corporate world for coming to the aid of Sanje to ensure the club held its tournament successfully.
Mr Mulenga, who was the guest of honour at the Sanje Open tournament, urged the club to get ready for the web-based electronic handicapping system, currently being piloted at Lusaka Golf Club.
Mr Mulenga said the electronic handicapping system will be rolled out throughout the country soon.
He bemoaned the poor performance by amateur golfers during the Zambia Open Golf championship at Lusaka Golf Club and Nkana in Kitwe.
Mr Mulenga called for more game time for the amateurs to improve their performance and informed the gathering about opportunities for local golfers such as internships at South African academies.
Responding to the club’s request for course maintenance equipment and technical support for training of junior golfers, Mulenga said the ZGU also depends on partners to survive.
He said last year, the ZGU received golf equipment from Royal and Ancient of Saint Andrews which it distributed to the clubs that had requested for help and Sanje was not among the recipients because they did not submit their requirements.
The two-day Sanje Open golf tournament won by Kabwe-based golfer Denmark Mulambo, who had 156 gross, was supported by a record 10 companies.
It attracted a field of 37 golfers from Kabwe, Lusaka, Monze and Mumbwa.