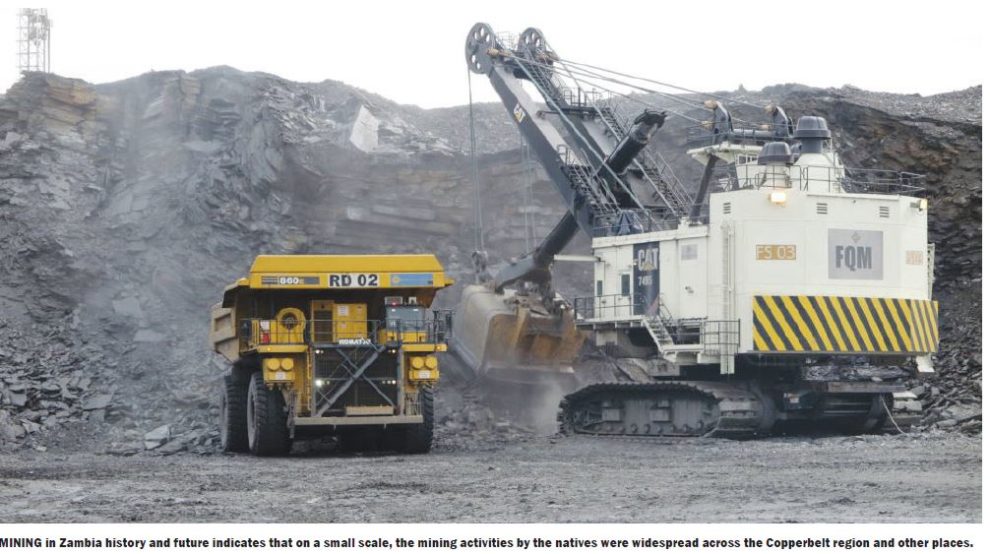 CHISHALA MUSONDA, Ndola
ZAMBIA is blessed with a variety of natural resources which have been utilised for many years and are still being exploited with minerals the most made advantaged of resource.
Gemstones and base metals are the worthy natural resources in Zambia across the country, with the major minerals lying mainly in the north of the country.
The minerals have attracted interest from a lot of people around the world for exploration, even though locals have been able to identify where deposits of the reserves are.
History states that mining activities were a traditional way of survival of the forefathers whose activities were limited to rocky surface deposits because of the type of materials tools and materials then.
Ancient surface copper workings were known at Kansanshi, Bwana Mkubwa and Luanshya where exploration in the 1890s indicated there were significant deposits in the area.
Traditionally, locals melted and moulded the minerals into pieces of iron bars which were used as a medium of exchange for other metal products such as hand tools and weapons.
A report on Copper Mining in Zambia – history and future indicates that on a small scale, the mining activities by the natives were widespread across the Copperbelt region and other places.
In fact, most of the deposits discovered by the settlers were found with the assistance of local scouts, who had knowledge of the whereabouts of the copper minerals.
The Chibuluma Mine deposits are the only ones in Zambia known to have been discovered without information being passed on from the local people.
The curiosity that these minerals aroused to the world dates as late as the last century when European explorers and missionaries were traversing the southern part of Africa.
During the era of European explorers and missionaries, the modern day Zambia came to be known as Northern Rhodesia.
The report further goes on to report that the presence of copper in Zambia led to the region being placed under British indirect rule in 1889 in the scramble for Africa. Eventually, African territories were colonisised by European powers.
Zambia came under British rule.
“The years following 1889 saw extensive exploration activities in the region by western companies and individuals. Exploration activities led to the first commercial copper being produced at Kansanshi, Solwezi, in 1908. Later, prospectors obtained concessions from the British South African Company (BSA) which had obtained mining rights in the area from King Lewanika of the Lozi in 1900.
“As more copper deposits were found, Zambia was placed under direct British rule as a protectorate under the Colonial Office in 1924. Post-1924 saw the beginning of massive investments in mine developments, led mainly by American and South African companies. As a result, there was an influx of white settlers into the area as well as natives who migrated from their villages to provide labour on the mines,” the report reads.
The BSA was established following the merger of Cecil Rhodes’ Central Search Association and the London-based Exploring Company Limited which had originally competed to exploit the expected mineral wealth of Mashonaland but united because of common economic interests and to secure the British Government’s backing.
Mr Rhodes was a British businessman and while mining magnet and with the BSA founded the southern African territory of Rhodesia, now Zimbabwe and Zambia, named after him in 1895.
Further history indicate that BSAC claimed to own mineral rights over the whole of Northern Rhodesia under one series of concessions granted between 1890 and 1910 by King Lewanika covering a poorly defined area of Barotseland-North-Western Rhodesia, and under a second series negotiated by Joseph Thomson and Alfred Sharpe in 1890 and 1891 with local chiefs covering a disputed area of North-Eastern Rhodesia.
This claim was accepted by the Government of Britain.
When the Royal Charter of the BSAC ended, which was after 35 years until 1924, BSAC joined a group of nine South African and British companies which financed the development of Nchanga Mines, to prevent them falling under US control.
As the now Zambia was placed under direct colonial rule of Britain following the full territorial control, the BSA possessed extensive land and mineral rights in both the Rhodesias (Zambia and Zimbabwe) and, although its land claims in the now Zimbabwe were nullified in 1918, its land rights in Zambia and its mineral rights had to be bought out in 1924 and 1933 respectively, and its mineral rights in Northern Rhodesia lasted until 1964.
Zambia gained its Independence from British colonial rule on October 24 1964.
And Wikipedia writes that BCA handed over its mineral rights to the new Government of Zambia and a year later the business merged with the Central Mining and Investment Corporation Limited and the Consolidated Mines Selection Company Limited into the mining and industrial business of Charter Consolidated Limited, of which just over one-third of the shares were owned by the British South African mining company – Anglo American Plc.