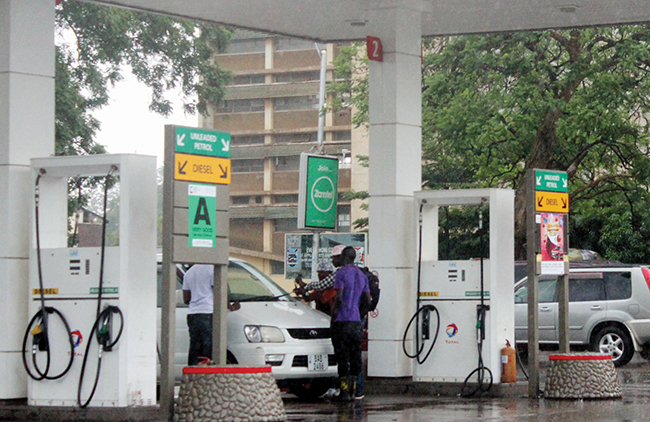 STEVEN MVULA, Lusaka, NKWETO MFULA, Chingola and MWILA NTAMBI, Kitwe
VARIOUS stakeholders are elated by the reduction of fuel pump prices and have appealed to the business community, especially those in the

transport sector, to pass on some of the benefits to consumers by reducing bus fares.
On Monday, the Energy Regulat ion Board (ERB) announced the reduction in prices of petroleum products necessitated by excess supply, high oil inventories and appreciation of the Kwacha, among other factors.
Petrol is now fetching K11.67 per litre from the previous K12.50 while the price of diesel has gone down from K10.72 to K9.87 per litre.
Economics Association of Zambia president Crispin Mphuka said in an interview that consistent review of fuel prices is the best action to take.
“We have always called for a monthly review of fuel prices and adjustments on a regular basis because that is the best thing to do. Government must always pass on the benefits to the consumers. We hope public transport owners will reduce bus fares,” Dr Mphuka said.
Zambia National Farmers Union president Jervis Zimba welcomed the reduction and hoped that it will have a positive impact on consumers.
“The price of fertiliser is still high. Unless we look at the figures, it’s too early to state that we will also effect reductions on our products,” Mr Zimba said.
Public passengers transporter Ishmail Kankhara said it is too early to say public transport fares will be reduced as they will have to sit as commuters to deliberate on the matter.
Zambia Consumer Association (ZACA) acting executive secretary Juba Sakala said the reduction of fuel prices is as a result of good economic policies pursued by the government.
Mr Sakala said in a statement that Government’s good policies have resulted in the appreciation of the local currency and subsequently reduction in fuel prices.
He urged all fuel dealers to quickly adjust the prices of fuel so that consumers can benefit.
“We applaud the government for this positive development and note that the reduction of fuel prices has been made possible due to the good policies pursued by the PF government.
“This will give some relief to motorists. We also urge public transporters to adjust bus fares downwards,” he said.
Zambia Jubilee Coalition Muchinga Province coordinator Francis Kapyanga said in a statement that the reduced fuel prices is a manifestation of Government’s concerted efforts to revamp the economy through austerity measures it has put in place.
Mr Kapyanga said players in transport and goods provision sectors should be compelled to accordingly effect price reductions for their goods and services.
“This reduction has come about obviously due to the stable and steady appreciation of the Kwacha against major foreign currencies,” Mr Kapyanga said.
He said the reduced fuel prices should trickle down to ordinary citizens in terms of low bus fares and prices of goods and services.
Mufulira Chamber of Commerce and Industry vice-president Lackson Ndhlovu said the decision will help reduce the cost of doing business.
Mr Ndhlovu said fuel drives all factors of production and that the drop in its price is likely to trigger reductions in other costs such as transport and goods.
He said the reduction of fuel prices also shows that the Zambian economy is gaining resilience and stability.
“We would really like to thank ERB for the gesture because it will give us benefits as a business community in terms of reduction in the cost of doing business,” he said.
Mr Ndhlovu said the reduction of fuel prices will also help increase the spending power of ordinary citizens.
“The spending power will definitely improve especially that the price of mealie-meal, which is our staple food, has also been going down,” he said.
He appealed to the business community, especially those in the transport sector, to ensure that they pass on the benefits to consumers by reducing bus fares.