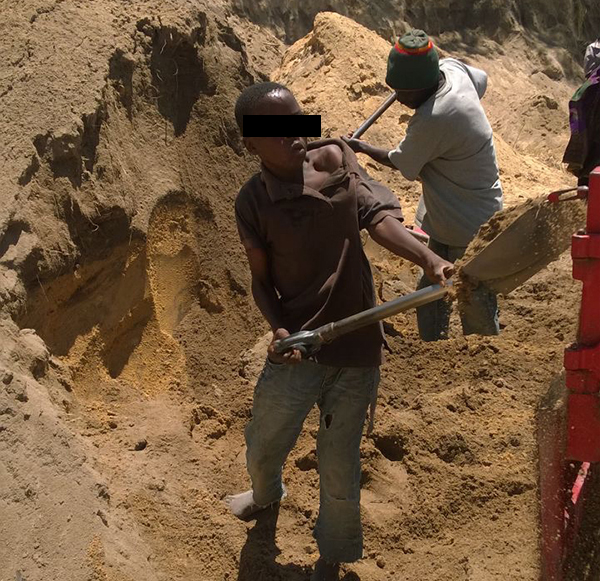 CHILDREN are the future of any country.
How they are natured in their young age

has a bearing on how productive they become as adults and subsequently on the future of the country.
However, like many other developing countries, Zambia is not exempted from challenges that threaten the well-being of children and that of the country.
Child labour is one such challenge that has been a common phenomenon in our society for decades now.
Child labour, which is said to be the extent to which work is injurious, negative or undesirable to children, has potential to undermine the well-being of children and their future contribution to the country.
Under the Zambian laws child labour is defined by the Employment of Young Persons and Children’s Act as “work carried out by children under conditions which are detrimental and dangerous to the child and affects proper physical, emotional and intellectual development in violation of international and national legislation”.
According to this definition, some of the dangerous conditions include “sexual exploitation, children working underground in mining or workload, physical conditions of work and/or intensity of work in terms of duration or hours of work even when the work is termed non-hazardous and safe”.
However, it is important to distinguish between child labour and child work.
While Child Work is given to groom the child into a responsible citizen, Child Labour is done in slavery-like conditions and is exploitative in nature.
In most instances, children engaged in Child Labour are prevented from going to school and getting a basic education.
For those in school and engaging in laborious work, their school performance is affected leading to failure and subsequent dropping out of school.
Given the debilitating effects of Child Labour on our future leaders and the country as a whole, we are concerned by the high statistics of Child Labour revealed recently.
During the 2017 commemoration of the World Day Against Child Labour recently, it was revealed that 595,000 children are employed in various economic sectors across the country, 58 percent of whom are below the age of 14.
As acting Minister of Labour Michael Katambo rightly stated, the fight against Child Labour is a huge task which requires concerted effort, commitment and action by all stakeholders.
While the task of fighting Child Labour is huge, we are comforted that Government is not sitting idly but making effort to address the problem.
We know that Zambia has signed a statutory instrument on hazardous work and has implemented policies on the worst forms of Child Labour such as the National Child Labour Policy.
Government has further put in place a National Action Plan on the elimination of the worst forms of Child Labour and has adopted the National Employment and Labour Market Policy in a bid to eradicate the scourge.
To create more impact at community level, Government has also formed 22 district child labour committees country-wide and is working in conjunction with the International Labour Organisation and other stakeholders to build capacity of committees.
While Government has done well at policy and legislation level, we implore those charged with the responsibility of implementing and monitoring programmes aimed at eliminating Child Labour to up their game.
Culture being one of the major contributing factors to Child Labour besides economic and literacy levels, there is need for heightened sensitisation on the devastating effects of Child Labour on both the child involved and the society they live in.
In Zambia, for instance, we have seen a trend where young girls are brought from rural areas to come and work as maids in urban areas.
These children are made to assume lives of adults as they are made to take care of families.
Some of these children are pushed into Child Labour after losing parents who are bread winners while others are literally sent by parents to help fend for the family.
This only points to the disintegration of the extended family, which played a key role in fending for needy members, especially orphans.
Given the above state, it is indisputable that the responsibility to eliminate child labour lies not only on Government, employers and non-governmental organisations but on every citizen who cares about the country’s future.