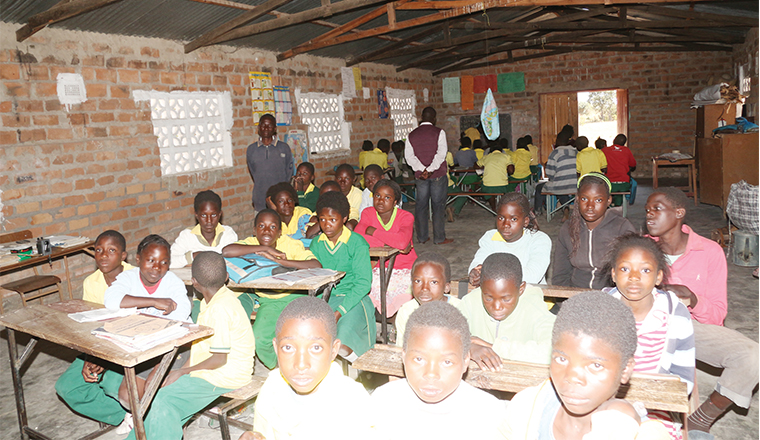 CHATTING EDUCATION with KENNETH CHIMESE
THE number of children who are of school going age but are not enrolled in either government or private schools has been estimated to be over one million by the Ministry of Education, Science, Vocational Training and Early Education.
Such a large number of children comprise those that cannot find a school near home, and others who cannot afford school fees.
The majority of children are attending what are known as open community schools. Statistics indicate that there are around 600,000 children attending such schools. And this is about 30 percent of the total number of children of school going age in the country.
The place that community schools occupy in education provision in Zambia is made even more prominent when one considers that open community schools have existed for more than two decades.
These schools are found in almost every corner of Zambia. In towns and peri urban areas, it is common to find a good number of children whose parents are doing blue collar jobs, enrolled at community schools.
Several communities, the church including individuals have set up community schools. There are also international charity organisations such as Save the Children, World Vision and Development Aid from People to People (DAPP), that have been offering interventions in the education provision gap, by assisting community schools in areas like capacity building, teacher training and materials mobilisation.
Because of the important role community schools have been playing in narrowing the gap between demand for education and actual access to education, the government, through the Ministry of Education, Science, Vocational Training and Early Education, has come to acknowledge the need for community schools.
The Patriotic Front manifesto recognises the role of community schools and the government has committed itself to upgrading community schools by directly engaging organisations working with such institutions.
What is of essence at this stage is for everyone to acknowledge that as we pass the golden jubilee, the community school concept must be given more focus and structure.
Even beyond the jubilee, there shall be poor people who will not afford to send their children to government schools. And even capacity at government schools is not there to give a school place to every child.
What then should be the way forward as we embrace and go through the golden jubilee? If community schools are so integral, what effective organistional framework should be in place to ensure that children at community schools are better served than presently? What changed role should players at community schools play?
The Zambia Open Community Schools (ZOCS) is a non-governmental organisation whose main aim is to enhance access to education for orphaned and vulnerable children, for those with special needs and the girl child.
Government has been unwavering about its commitment to upgrading community schools through infrastructure development, which should include construction of accommodation for teachers, providing trained teachers, improving and sustaining the supply of teaching and learning materials.
However, what has happened in the upgraded schools has worked against the concept and ideals of community schools. Upgraded schools have introduced direct and indirect costs which have made the aspirations of a vulnerable child unattainable.
Upgrading a community school does not make the economic and social status of children and their parents suddenly better. The upgraded schools remain in the same poor localities where people still toil to make a living. Therefore, an upgraded school which chooses to introduce uniforms is clearly not attuned to the realities in the community.
Another aspect that the ministry [education] has considered essential is appending to schools an early childhood education centre, a model which even community schools must be helped to adopt.
Government will have to educate communities to begin creating play centres where children who are starters can only go to sing and play â€“ no writing at all! This could be the beginning of early childhood education.
It is these and other issues which, in the post-jubilee era, should make ZOCS and other players start repositioning themselves. The organisations have a big role to play.
And for a long time to come, the relevance of community schools and organisations such as ZOCS to the majority of poor communities, will remain indisputable.
ZOCS must lobby for a greater mandate to take full charge of community schools. The organisation will accordingly have to be restructured to take on broader functions and assume greater authority and autonomy.
The changed functions should include training of teachers (which should take care of the problem of untrained volunteer teachers), lobbying for government annual budgetary allocations and its own inspectorate unit.
Is it not time that ZOCS started to raise its bar of advocacy and ensure that more regulatory powers are given to the organisation to run community schools as authorities, backed by relevant legislation?Â  Comments to: kennethchimese@hotmail.co.uk, 0966 902506, 0974 469073