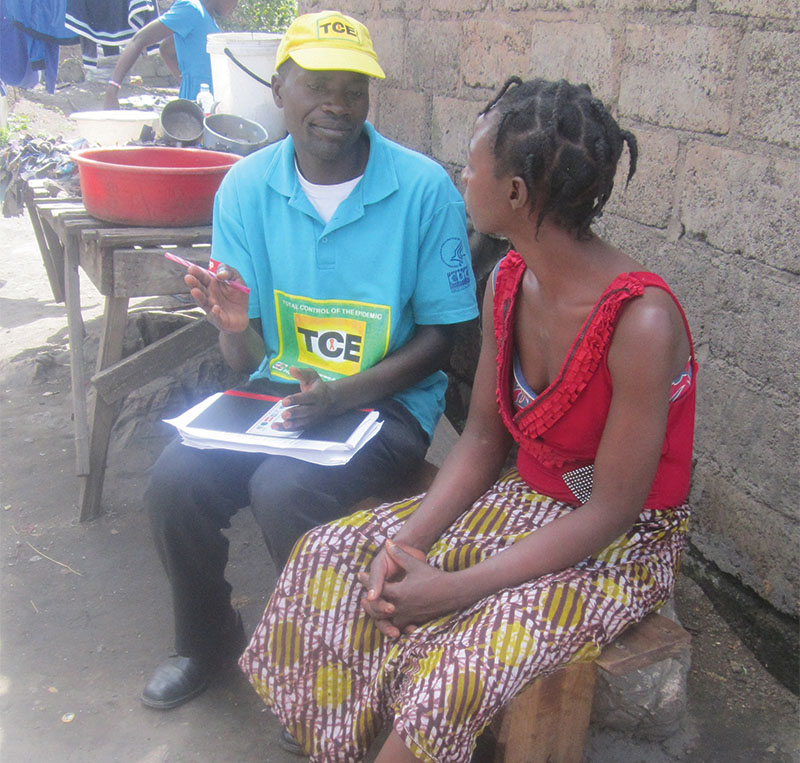 ZIO MWALE, Lusaka
ZAMBIA being one of the countries in sub-Saharan Africa ravaged by HIV and AIDS, many organisations have come on board with community-based programmes to curb the spread of the disease.
â€œOnly people can liberate themselves from the AIDS epidemic. Everybody else can only participate,â€ is the motto for the Total Control of the Epidemic (TCE) programme coined by the Development Aid from People to People (DAPP).
About five years ago, DAPP started the TCE project in Mazabuka and Monze districts, where the first 50 field officers were trained by the Zambia Counselling Association and Ministry of Health to coordinate door-to-door HIV and AIDS sensitisation.
Indeed, the project was well received by most people in Mazabuka district as many residents were soon able to receive field officers into their households.
TCE is a systematic door-to-door outreach about HIV and AIDS prevention as well as care programme which provides the necessary information and Voluntary Counselling and Testing (VCT) services, positive living messages and care activities to all individuals in the target areas.
In April 2015, due to the increase of the disease in Lusaka city, TCE decided to train 150 field officers to help sensitise people in highly affected communities.
Among the trained officers is Crosper Hagwananama, a 34-year-old man who dedicates most of his time talking to people about HIV/AIDS in Kabwata, Misisi and surrounding areas.
Mr Hagwananama joined the TCE team in 2012 in Mazabuka district as a passionate HIV/AIDS activist after he was visited at his home by TCE field officers.
The visit left a mark on his life, so he decided to voluntarily sensitise other people on HIV and AIDS in his home town, Mazabuka.
By then, Mr Hagwananama was working as a security officer at Kafue Sugar Company but his family was in Mazabuka.
Later in 2014, he left his job as a security guard and decided to join the TCE field officers in Lusaka and was Obituary
therefore trained as a field coordinator.
â€œI left my job as a security officer because the money I was getting was not enough to feed my family, so I decided to do something that could help my country understand the AIDS virus,â€ he said.
In Lusaka he is assigned to work in the Kabwata TCE zone, covering Kabwata, Misisi and surrounding communities.
Everyday Mr Hagwananama is seen walking around Misisi township and he is known for talking to residents about the dangers of HIV/AIDS as well as the importance of going for voluntary counseling and testing (VCT).
Though the locals may be hostile to strangers, and the township is infamous for crime, somehow Mr Hagwananama has been accepted as a courageous and brave HIV activist.
And when they see him passing by, some youths who are normally found drinking beer near the football pitch would scream, â€œbantu batu tipimenkoni blood kaili,â€™â€™ (Hey friend, can you please come and test our blood).
There are still some people who are hostile to the HIV programme and they accuse field workers of being Satanists who collect blood for rituals.
â€œIt is really a great challenge to make the people, especially those from Misisi, understand that I am in their compound to sensitise them about HIV/AIDS,â€ Mr Hagwananama said.
Notwithstanding the challenges, he has, managed to make friends in Misisi and he visits different homes every day to talk about HIV/AIDS and other related diseases like tuberculosis and sexually transmitted infections.
From November last year, one of the homes Mr Hagwananama has been visiting regularly is that of Barbara Chishimba.
After committedly hosting many counseling sessions with this receptive family, Mrs Chishimba was eventually co-opted into the TCE team as a â€˜passionateâ€™ as HIV activists under the programme are called, and she is reaching out to other people in her community.
For the Chishimbas, who are affected by HIV, Mr Hagwananama was like an angel sent to their home because he was able to convince Barbaraâ€™s husband to go for VCT at Kabwata Clinic.
â€œMy husband is a drunkard, but when I told him about this programme, he said he was willing to go to Kabwata Clinic to learn more about the disease, which is good,â€ Mrs Chishimba said.
Mr Hagwananama says he loves visiting the Chishimba family because they are welcoming and are not shy to discuss anything about HIV/AIDS.
Indeed field officers are the backbone of the TCE HIV/AIDS programme. They are recruited locally and undergo intensive training to learn how to engage individuals in open discussions about the disease and sexual behaviours.
Division commander for Lusaka and Southern provinces Jabes Kanyanta said the programme is funded by the Centre for Disease Control (CDC), with support from the United States Presidentâ€™s Emergency Plan for AIDS Relief (PEPFAR).
â€œField officers help us as TCE; they enlists local volunteers, called the â€˜passionateâ€™, to support HIV infected and affected persons and their families in the local community,â€ he said.
Passionates play a vital role in overcoming the stigma and discrimination surrounding HIV, and are often HIV-positive.
They also lead in the formation of â€˜positive living clubsâ€™, which are support groups, and members engage in a number of activities, such as income generation and awareness-raising programmes.
The aim of the TCE programme this year is to reach out to thousands of people in Kamwala, Kabwata and Mtendere and other communities where HIV prevalence is above 10 percent. This will be done through door-to-door visits by field officers in different zones.
So far, Mr Hagwananama says that from last year, when he came to Lusaka, he has managed to reach out to about 3,000 people in Misisi and the surrounding areas.
The TCE programme is founded on the belief that each individual in the community can play a significant role to halt the spread of HIV and to support those infected with the virus.
Overally, the programme has proven that community outreach programmes are key in the teamâ€™s mission to have individuals fully defend and free themselves from HIV and AIDS.

When it rains cats and dogs