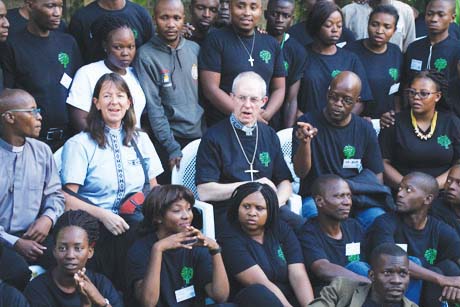 THE Archbishop of Canterbury Justin Welby with the young Anglicans at the Cathedral of the Holy Cross in Lusaka during the youth conference on intentional discipleship and environment.

VIOLET MENGO, Lusaka
BISHOPS around the world should plant a tree every time they do a confirmation or baptism; this was one of the recommendations put to the archbishop of Canterbury Justin Welby by a group of young Anglicans in central and southern Africa.
Gathered at the Cathedral of the Holy Cross in Lusaka from April 4 to 8, the Anglican Church youths realised that climate change affects all people, including churches, and as young people, their contribution to the fight against climate change is vital.
Climate change is the consequence of unchecked pollution. When carbon emissions caused by human activity enter the air, they have dangerous effects on the environment, the economy, and peopleâ€™s well-being.
But just as human activities are responsible for climate change, people can halt its progress.
The young Anglicans who had gathered ahead of the 16th Anglican Consultative Council (ACC16) in Lusaka, discussed discipleship and environmental matters.
They also pledged to dedicate a 100-day campaign to raise awareness on climate change through what they dubbed â€œNew Green Growthâ€ upon returning to their respective dioceses.
Drawn from South Africa, Swaziland, Lesotho, Angola, Namibia, Mozambique, Zambia, Zimbabwe, Malawi and Botswana, the young Anglicans were sponsored by the UK-based Christian Development Agency called Tearfund.
Some of the young people that were invited to take part in the conference were already engaged in environmental campaigns in their local churches.
Timothy Chimwayi, one of the young Anglicans from Matero township in Lusaka, is among the 75 youths who pledged to promote the New Green Growth campaign.
Timothy said young people need to play their role as good stewards of Godâ€™s creation.
At the end of the conference, the young people came up with seven thematic messages that focus on water, mines, renewable energy, waste management, deforestation and land erosion, air pollution and farming practices that were presented to the Archbishop of Canterbury.
The youth made presentations to Bishop Welby regarding their responsibility of stewardship for the earth.
Some presentations were spoken; others took the form of sketches, incorporating music and drama.
St Peters Parish priest and coordinator of the youth conference Robert Sihubwa said young people from central and southern Africa were gathered to discuss climate change and intentional discipleship.
Father Sihubwa said the conference had three major strands which are:
1. Intentional discipleship
2. Youth leadership
3. Climate change and the green campaign.
â€œWe were also partnering with a group called Young Green Anglicans whose aim is to campaign for green dioceses and green countries,â€ Father Sihubwa said.
He said young people resolved that at baptism events and major church ceremonies, there has to be the planting of trees, and that by so doing, the Church will be contributing to â€˜green growthâ€™.
According to Father Sihubwa, when God placed the first human being on earth, in the Garden of Eden, one of the key commandments he gave man was to look after the garden, till it and sustain it.
He said the fundamental commandment God gave to man, before the famous 10 commandments, was to look after the environment.
â€œWe are going back to the fundamental commandment which says that connecting with God is connecting with his passion and his passion is his environment that must co-exist with human beings,â€ Father Sihubwa said.
He said climate change is an issue currently affecting every one and the need for the Church to focus on environmental conservation is mostly influenced by the commandments of God.
Father Sihubwa said the Church is supposed to take a leading role in looking after the environment because Christians are the custodians of the commandments of God.
â€œWe are the ones that God tasked to teach the world and show them how to look after the environment,â€ he said.
Father Sihubwa said some of the young Anglicans were getting accurate information on climate change for the first time, while others were already sensitised on the matter and saw the gathering as an opportunity to remind themselves of what they already knew.
Bishop Welby told the young Anglicans that over a long period of time, people had been noticing changes in the climate, but could not attribute it to anything as they were not sure what was happening.
The archbishop, who agreed to act as the public face for environmental issues within the Anglican, was impressed with the zeal he saw among the young people.
â€œIt is a great honour to be requested to be the honorary chair and patron of the Anglican Communion Movement on Environment,â€ Bishop Welby said.
He said it had come to him with fresh force during the ACC16 and he was very honoured to be allowed to have a role to play in caring for the environment.
Naomi Foxwood a representative from the Global Advocacy Department of Tearfund, said the agency had sponsored the conference because of its desire to see the global church mobilised on matters of the environment and poverty.
With various stakeholders taking part in addressing climate change, it goes to show how important the ratification of the Paris climate change agreement is to the world.
Recently world leaders agreed at the United Nations (UN) headquarters to ratify the Paris climate deal and get the ball rolling on plans to check global warming.
Held on Earth Day, the ceremony in New York City came four months after the deal was clinched in Paris and marked the first step towards binding countries to the promises they made to cut greenhouse gas emissions.

Plastics yet to sink in

Why stereotypes on female journalists?

UPND win was against all odds