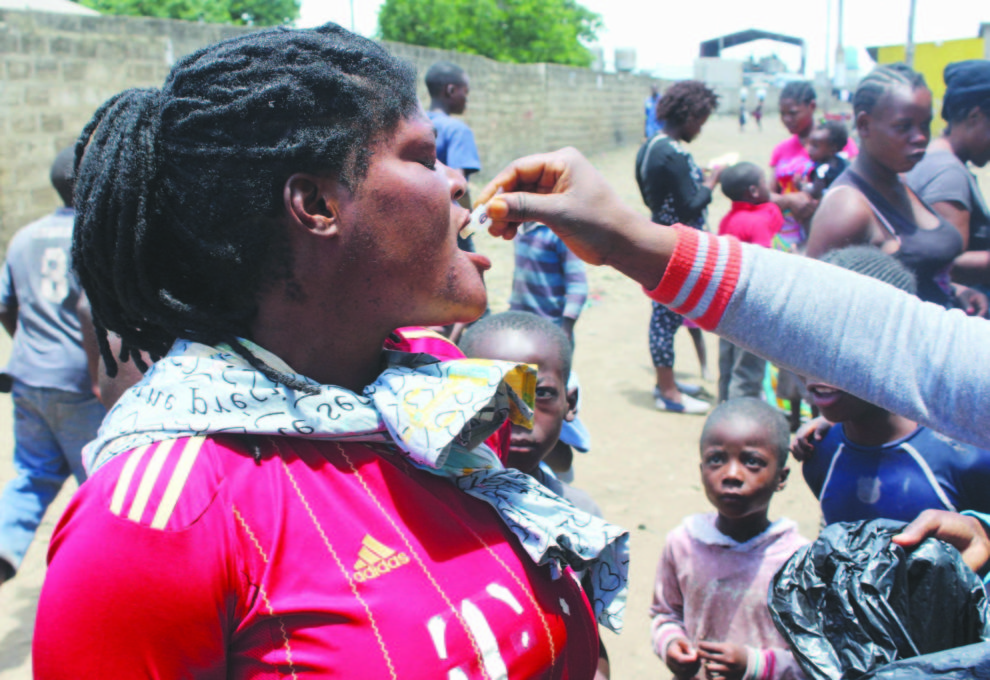 DOREEN NAWA, Lusaka
IT HAS been a difficult two weeks for Martha Phiri, 42, who is a resident of Msanida area in Lusaka’s George township, the newest cholera epicentre in town.
Mrs Phiri, a widow, lost her youngest son, 14, this month.

“He was like a replacement for my late husband,” she says. “Everywhere I went, I was with him. He was very handy regarding helping out on the daily activities here at home and wherever he is sent.”

Mrs Phiri became widowed five years ago. But the death of her son has left her with so many questions.
“My son never got sick,” she says. “He was fine the whole day and was around the makeshift shop with his friends. To date, I do not know what killed my son.”
Mrs Phiri believes her son was bewitched.
“My son never had diarrhoea, he did not vomit too,” she says. “It was on a Sunday and he was with his friends the whole day until around 17:00 hours when he complained of something like heartburn.”
On that material day, two hours later, her son went into the livingroom and asked for water to drink from the mother.
“I offered him the water as requested,” she says. “He then sat on the chair and kept turning and tossing. I asked what was wrong, and he suggested he should be taken to the hospital. As we were preparing, he asked me to sit down and hug him.
“I was ready to take him to the clinic had the condition worsened, but he died whilst talking to me and never showed signs of deteriorating health.”
A certain substance started coming out of her son’s nose and mouth.
“Immediately I sat and put him on my laps, [some] white stuff started coming out of his nose, and he became restless, and closed his eyes,” she says.
“He was dead. I called for help and at that point, a crowd had gathered around my home.”
A few minutes later, the family hired a taxi and took the body to George Clinic.
For Mrs Phiri, what hurts the most is that she was not allowed to see her son’s body being lowered into a grave. She was represented by two male family members.
“I needed to see my son being lowered in the grave, I was not there. I was only taken to Chingwere Cemetery the following day to be shown where my son was buried,” she says. “It hurts. I can’t believe he is gone just like that. He did not vomit nor did he have diarrhoea.”
A community health worker at George Clinic, whose name cannot be revealed because she is not authorised to speak to the media, confirmed that Mrs Phiri’s child died of cholera.
“We received a case of a Brought In Dead (BID) in the early hours of January 7, 2018,” the health worker said. “After getting the history of what transpired, we treated the case with the urgency it deserves. The corpse was tested for cholera and it was found positive.”
A team of health personnel from George clinic and Ministry of Health accompanied by two male family members of the dead boy and witnessed his burial.
While Mrs Phiri’s story is about the loss of her son, it is different with other residents.
The brush with cholera on some of the residents has left them suffer at the hands of their neighbours, making them seek alternative places to relocate to.
For residents in Kanyama, Chibolya and George compounds whose relatives have died of cholera, the stigma they have had to suffer has been too much for them.
Kanyama Ward 10 councillor Brighton Bilumba confirmed the relocation of a number of residents who have lost their relatives due to cholera.
“Right now, it’s difficult to trace the people that have lost their loved ones because most of them have been stigmatised and have relocated,” Mr Bilumba says.
And Jane Chirwa of Lusaka’s Kanyama township says because of cholera, people don’t touch each other anymore.
“Even with my family, my own brother, I don’t touch them, because I don’t know who he interacted with. After church, we usually shake hands, but we stopped that. The pastor has to put on gloves to serve communion.”
“Everything is shut down, no business, no work. Many people have lost their jobs and they are sitting at home with nothing to do. People who worked as waiters, bar attendants, shop keepers are back in their homes because various business places have been closed,” Ms Chirwa says.
A shop owner in Kamwala trading area only identified as Suresh fears that the economy could crumble.
“People will have to start all over again. A number of them have lost jobs. The supplies have overstayed and chances are high that they will expire and we will lose out,” Mr Suresh says.