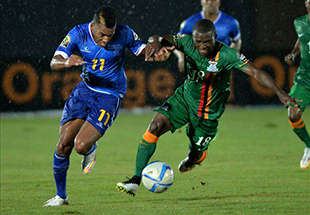 VICTOR KUMWENDA, Ebebiyin Stadium, Equatorial Guinea
CAPE VERDE 0 ZAMBIA 0
ZAMBIA were last night kicked out of the Africa Cup of Nations at the preliminary stage after settling for a goalless draw with underweights Cape Verde.
Needing victory to progress to the quarter-finals, the Chipolopolo fired blanks at a rain-soaked pitch at Ebebiyin Stadium. Cape Verde were also eliminated.
Tunisia and Democratic Republic of Congo (DRC) who drew 1-1 in Bata progressed to the last eight. Tunisia topped Group B with five points, DRC and Cape Verde have three points apiece but the former have a better goal aggregate while Zambia managed two points.
Zambia squandered a myriad of opportunities with Evans Kangwa and substitute Mukuka Mulenga missing sure goals late on.
Kangwa shot wide a Chisamba Lungu splitting pass in the 77th minute while Mulenga failed to put the ball into the net after goalkeeper Josimar Dias had parried Rainford Kalabaâ€™s cross into his way on 83 minutes.
Zambia started on a promising note with Kondwani Mtongaâ€™s header from a Kalaba corner cleared on the line in the fourth minute.
Zambia pushed forward with Given Singulumaâ€™s shot was parried by Dias but the unmarked Kangwa was offside on 15 minutes.
Kalabaâ€™s shot on the edge on the box in the 24 minute was blocked for a corner.
Cape Verde could have gone ahead in the 35th minute when Garry Rodriquez outpaced Emmanuel Mbola but his final touch went wide.
Goalkeeper Dias parried for a corner Kalabaâ€™s thunderbolt from a freekick in the 41st minute.
Cape Verdeâ€™s best chance to score was on the nick of half time when Ryan Mendes failed to tap in a Rodriques free-kick with goalkeeper Kennedy Mweene beaten.
Zambia, the 2012 African champions, were eliminated in the group stage at the 2013 showpiece in South Africa.