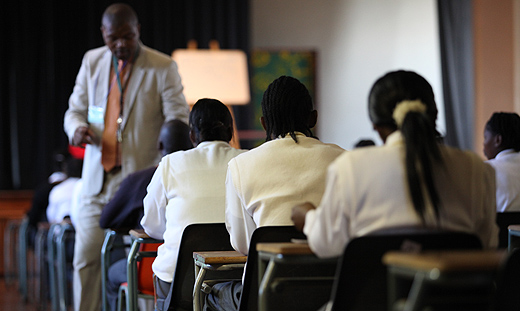 From CHINOYI CHIPULU in Chingola
A FIRST ever prefectsâ€™ conference is scheduled to be hosted in Chingola on the Copperbelt Province to explore ways of curbing examination malpractices and indiscipline among pupils.
Kabundi Secondary School head prefect Martin Kabwe said the conference will attract prefects from all secondary schools across the district.
Kabwe said in an interview that examination leakages had become rampant and routine in most schools countrywide, adding that this has forced pupils to stop studying.
He said pupils should desist from examination malpractice as it is poised to have a negative impact on their future.
â€œPupils who are found of using leakages should know that they are not serious about life as leakages do not help in shaping their future,â€ he said.
Kabwe said teachers should also desist from the practice of concentrating on extra tuitions rather than class lectures as the tendency subsequently leads to examination leakages.
â€œOur teachers are the major contributor to this illegal act because they do not concentrate on teaching in class but rather focus on conducting extra lessons at a fee,â€ Kabwe said.
He encouraged his fellow pupils to work hard during examinations and desist from other vices like alcohol abuse and prostitution.
Meanwhile Government will soon embark on a vigorous sensitisation campaign on the dangers of early marriages and drug abuse in schools across Chingola.
District education board secretary Misozi Mwenya said the awareness programmes will be hosted in conjunction with the Ministry of Health.
Ms Mwenya said in an interview that pupils and youths in general need to be educated on the negative impacts of early marriages and drug abuse. .
â€œWe want youths, especially girls, to shun early marriages and concentrate on productive things such as educationÂ  for the benefit of their future.
â€œWe have introduced the re-entry policy so that girls can go back to school after giving birth,â€ she said.
Ms Mwenya said officials from the ministry will sensitise girls on the implications of getting married at a tender age.