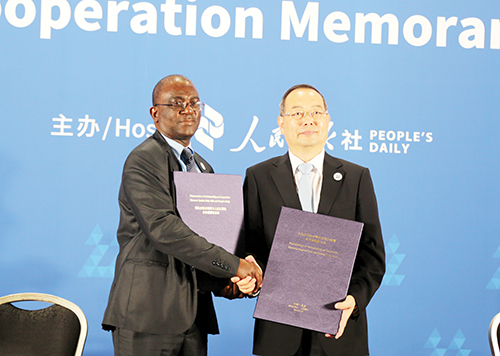 CHARLES CHISALA, Lusaka
IT WAS one of the largest gatherings of news media at one venue from all the corners of the globe.
On September 21, 2015, a total of 122 delegates representing 140 media organisations from 60 countries gathered at the posh China National Convention Centre in Beijing.
The Peopleâ€™s Daily, Chinaâ€™s largest circulation newspaper, organised the 2015 Media Co-operation Forum on One Belt, One Road initiative.
President Xi Jinping proposed the initiative in March 2013. It aims at fostering inclusive development that delivers mutual benefits to China and its partners as the Asian giant continues opening up to the world.
The initiative shares some similarities with Chairperson Mao Zedongâ€™s Marshal Plan, and is being implemented along the 21st Century Maritime Silk Road – from China, cutting through central and western Asia, Europe and Africa.
Its thrust is infrastructure development in partner countries.
Vice-president of the 12th National Committee of the Communist Party of China Central Committee (CPCC) and head of the International Department of the Central Committee Wang Jiarui set the tone in the opening session.
Mr Wang said there are some nations that are sceptical about the initiative, and urged the media to collaborate and help explain its benefits to the world.
â€œThe media must co-operate among themselves and with us in explaining that the One Belt, One Road is not aimed at changing the current global economic order, or exerting influence on other nations,â€ Mr Wang said.
Instead, he said, it promotes development that is based on inclusion as opposed to exclusion, and creates opportunities for co-operation among nations through the pooling of resources.
â€œIt is a fast-speed train for other countries to board, and a platform for common development. We are happy that most countries along the belt have expressed willingness to participate,â€ Mr Wang said.
â€œWe are expecting the media to play a big role in the One Belt One Road.â€
And Peopleâ€™s Daily president Yang Zhenwe urged the media to create positive energy towards the implementation of the One Belt, One Road initiative.
Mr Yang said it was important for the media to report on the initiative and its benefits to the world.
â€œIn order to clear doubts, there is need for more exchanges among the media. The Peopleâ€™s Daily will play a bigger and more positive role in mobilising the media support force for the One Belt, One Road initiative,â€ he said.
Mr Yang said the initiative is part of Chinaâ€™s opening up to the rest of the world and its promotion of the spirit of tolerance.
â€œWhen we share a common destiny, we can build a better tomorrow. We want to be a responsible country by participating in the affairs of the world,â€ he said.
Party and government officials, and media executives from different provinces including Henan, Shaanxi, Shangdong, Gangsu, Hainan and Jiangsu also spoke, urging the media to tell the world about the vast opportunities for doing business that abound in their respective regions.
The delegates boldly and honestly explored the opportunities and challenges facing the media globally, and their impact on co-operation towards the success of the One Belt, One Road Initiative.
The digital revolution kept popping up as a major challenge but which the media should turn into an opportunity for deeper co-operation, including staff exchanges.
Radio Netherlands Worldwide acting editor-in-chief Andy Clark said the traditional media should not fear the new media as a threat, but use it as an opportunity.
â€œThe force of the new media is unstoppable. In my country, almost everyone has a smartphone or tablet with access to the internet. But we can use this force as an opportunity to reach a bigger audience,â€ Mr Clark said.
Deputy editor-in-chief of the Quangming Daily of China Lu Xiangao said the media in countries along the Silk Road should use digital technology to contribute to the implementation of the One Belt, One Road Initiative.
Editor-in-chief of Les Echos of France David Barroux said the traditional or mainstream media regarded the internet as a threat a few years ago, but that the perception has now changed.
â€œWe saw the digital wave as a threat and the traditional, mainstream media as a dinosaur that was about to disappear.
â€œBut we now see the internet as an opportunity. We used to reach our readers in the morning of the next day in the past, but we now reach them at 10pm because the internet has put us under pressure,â€ Mr Barroux said.
Possible resistance by some partner countries along the Silk Road and the militarisation of sections of the route by powerful militaries were also raised as potential obstacles.
Officials assured that China will be careful not to disadvantage any country along the 21st Century Maritime Silk Road route, but ensure that there is consensus.
Vice Minister of Commerce Qian Keming said the initiative is meant to deepen his countryâ€™s trading co-operation with other countries, and not to impose its will on its partners.
He said where a country refuses to participate, China will not implement any development projects there but move to another willing partner.
It was also observed that some of the countries along the Silk Road are among the staunchest allies of the United States, which seems to be suspicious about Chinaâ€™s intentions and activities.
Overall, the forum succeeded in galvanising consensus among the media that Chinaâ€™s development master plan will be beneficial, especially to the weaker economies along the Silk Road.
A total of 33 media houses, including the Zambia Daily Mail, which was represented by its managing director Nebat Mbewe, signed co-operation memorandum of understanding with the Peopleâ€™s Daily for news and personnel exchanges.
Mr Mbewe said the agreement is important because it will improve the flow of information and improve understanding between the peoples of China and Zambia.
By the time the delegates were heading back to their respective countries, it was clear that China is regarding the media as a powerful ally as its One Belt, One Road Initiative navigates its way through the delicate Silk Road.